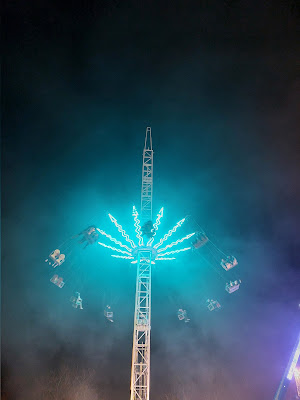 I've done an end of year list at the end of every year since starting the blog in 2010. I started to pull a list of albums and songs together back in November and thought I should at least try to finish it off. Everything I've listened to since the end of November has been coloured by Isaac's death so I'm not sure if this is how the lists would have turned out if things had been different but we are where we are, as people say.

I've heard loads of good albums this year. My initial list ran to over twenty albums (and that was before the Pye Corner Audio album turned up) and there are several I've not heard yet that would surely be contenders had I got round to listening to them (I'm thinking of Carnage by Nick Cave and Warren Ellis and this year's releases from LoneLady, WH Lung and Low). Floating around somewhere outside my top ten are these albums (in no particular order): Andres Y Xavi's Sounds From The Secret Bar; Stinky Jim's It's Not What It Sounds Like; The Vendetta Suite's Kempe Stone Portal; Steve Cobby's Shanty Bivouac (which has a close to perfect side 2); Richard Fearless's unsettling ambient techno masterpiece Future Rave Memory; Roisin Murphy's remixed Crooked Machine; Bicep's Isles; Reinhard Vanbergen and Charlotte Caluwaerts' Souvenir Des Bon Gout; Sons Of Slough's Bring Me Sunshine; Sonic Boom's remix album Almost Nothing Is Nearly Enough; Cheval Sombre's pair of albums Days Go By and Time Waits For No One; Dry Cleaning's New Long Leg; Cerulean by Nashville Ambient Ensemble; The Liminanas and Laurent Garnier's De Pelicula; The Grid and Robert Fripp's Leviathan; Rose City Band's Earth Trip. The Bagging Area top ten looks like this-

9. Mogwai 'As The Love Continues'

7. Dean Wareham 'I Have Nothing To Say To The Mayor Of L.A.'

5. Daniel Avery 'Together In Static'

1. Saint Etienne 'I've Been Trying To Tell You'

I wasn't expecting Saint Etienne to make an album as good as this, at this stage of things- made in isolation but sounding like the work of three people in a room together, I've Been Trying To Tell You is a woozy, reflective album digging away at late 90s nostalgia (but not sounding itself nostalgic), built around samples from that period and with a strong undertow of bass and a warm wash of effects. On top of this Sarah Cracknell's voice is used almost like a sample library, cut up phrases and snatches of dialogue.

4. Three EPs of outstanding new music from A Certain Ratio, 'EPA', 'EPC' and 'EPR'. I couldn't separate them so have bunched them together.

No question here, the single piece of vinyl/ mp3s I've probably played as much as any other this year since it came out in April, six wondrous remixes of Andy Bell's 2020 album The View From Halfway Down. Pye Corner Audio's sunshine dreamscape remixes were the sound of this year for me in lots of ways, especially the analogue cosmische of Skywalker, Indica and Cherry Cola.

So many good songs/ tracks/ remixes, I could easily list a top fifty. Someone wrote recently a top ten should be enough and I kind of agree- but all of these have been essential listening in 2021 (again, in no particular order);  AMOR 'Unravel' from Lemur; Daniel Avery's Lone Swordsman as remixed by Chris Carter; Craig Bratley and Amy Douglas' No In Between; 10:40's Sleepwalker; a pair of remixes of Fontaines DC, one of A Hero's Death by Soulwax, the other Televised Mind by Dave Clarke; A Mountain Of One's Stars Planets Dust Me; Perry Granville's Dexter In Dub; Mat Ducasse's Bunny's Lullaby; Dan Wainwright and Rude Audio's Early Morning; Future Beat Alliance's Primordial Sky; Daniel Avery's remix of Winter In The Woods by Leaving Laurel; Coyote's remix of Original Cell by Projections and Coyote's two track 12" Will We Ever Dance Again; Cheval Sombre's Althea; various Pye Corner Audio one offs (Fictional Drilling and Eyes Open stand out); and last but not least Woodleigh Research Facility's All Is Not Lost and Vernal Invocation releases.

As well as all of those Sean Johnston has been responsible for a steady stream of remixes in his Hardway Bros guise, any one of which could/ should be in the list below but they can have their own sublist here-

10. Richard Norris 'Music For Healing- December' (but most of the other monthly releases in this series could get in here too)

5. IWDG 'In A Lonely Place' (plus remixes from Hardway Bros, Keith Tenniswood and David Holmes )

2. Coyote 'Cafe Con Leche' from the Return To Life EP

1. David Holmes 'Hope Is The Last Thing To Die'

This song, a tour de force from Mr Holmes with vocals by Raven Violet, provided a glimmer of light in a year that has been bleak as fuck for all kinds of reasons, personal and political, macro and micro. The song is political, a call to arms, a lyric about not putting up with it any more,a demand to say enough is enough, but it works on a variety of levels for me. Hopefully 2022 will see it get a vinyl release.

Excellent selections there, Adam. I've definitely bought much more music this year but I could easily double the amount and still not have covered all of the top choices that you and other fellow bloggers have highlighted. Sean Johnston definitely deserves a Top 10 in his own right for his stupendously prodigious and brilliant Hardway Bros output this year. Pye Corner Audio arguably the same, for his remixes and steady flow of tracks which I've really enjoyed this year.

After a lifetime of keeping vaguely abreast of contemporary musical developments, I've found myself gradually slipping further and further behind over the past two or three years, to the point where I recognise depressingly little from your 2021 lists. There is much to catch up with. I have, however, particularly enjoyed many of the Andy Bell, GLOK, Daniel Avery and Hardway tunes I've bumped into here throughout the year and that David Holmes track (which I'm hearing for the first time today) is absolutely terrific.

Very honoured to be in your top EPs Adam. It's typical that when we were in the hight of lockdown last Jan/Feb I could only make clubby ravers, and as soon as it all opened up again I went downtempo! Anyway, glad my timing wasn't totally wasted - thanks as ever for your support this year. Here's to all the new music that 2022 will bring. All the best. Rich.

Cracking list Adam, some absolute pearlers in there. Pye Corner Audio, Richard Norris and Sean Johnston have been on fire this year, the Fearless ambient album is wonderful, and really pleased to see the St Etienne album at the top of your list. The initial word was it was an intriguing and interesting listen, but it surpassed all my expectations. 2022 will have to go some (and it will, they always do) to better 2021's musical output.

thank you for including me, Adam, and both here and in the broader sense. Thank you for sharing my music with others, but mostly just for listening. Being heard is an amazing thing I never thought would happen.

the race for my favorite writer of the year was a runaway. Your ability to write about the ineffable with such clarity and directness amazes me. I do wish so much that it hadn't been put to such a test this year. This community loves what you do, and we hear you.

Swede- if the only thing this post did was introduce someone else (you) to the David Holmes song , then it was worth it.

Jesse- you say the nicest things and I'm humbled. Thank you.

Everyone else- thanks for reading, contributing and commenting.

Great set of lists SA!
Once again we were listening to a good deal of the same music and came to some very similar and different offerings from artists.
I feel the songs I chose for my year end list reflect the ups and downs of 2021, the turmoil, the laughter, the sadness and the confusion.
I wish you and your's peace for the New Year.