I Put Your Statue Up In Albert Square 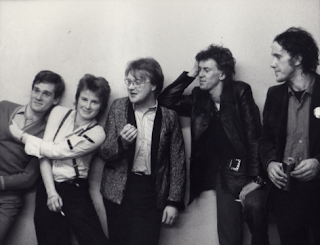 That's Albert Square Manchester, not Albert Square Walford. I had an email from a reader called Dan, who also lives in the cultural desert of Sale. Dan pointed me in the direction of The Distractions, a largely forgotten early Factory Records band. The Distractions released Fac 12, a wonderful piece of guitar pop called Time Goes By So Slow. The record was Single Of The Week in the NME and drew praise from Paul Morley (a bit inevitable perhaps) and Jon Savage, who called them 'the perfect youth club band'. There are so many little gems in the Factory back catalogue and this song is one of them. From Factory they went to Island, and then back to the independent sector with Rough Trade before splitting in 1981. They have become active again recently recording and gigging, and are set to release a compilation album this year. If this little blog helps to shift a couple of copies of that, or just jog a few memories, I'd be very happy.

What a great band. Still the only band I have seen more than 5 times live and they slit up 30 years ago.

The new stuff shows that Mike Finney's voice is still in fine form.

Keep up to date with the latest Distractions releases (the comprehensive compilation & new album in 2011) at www.thedistractions.co.uk and www.occultation.co.uk.

Next from the label is Factory Star's debut album from Martin Bramah, "Enter Castle Perilous."