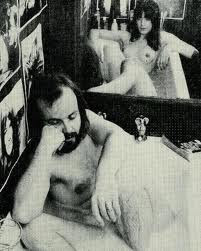 Keeping It Peel Day is organised across the web by Webbie, who you can find here explaining what it's all about. I joined in last year posting a track from Sabres Of Paradise's sole Peel Session. First up today is a Half Man Half Biscuit song, recorded for a Peel Session (in I think 2004) before it was available anywhere else, rapidly becoming an audience favourite. Paintball's Coming Home attacks those people, those couples, you know the ones- they've got a new conservatory, they got married on a Caribbean beach, they've got a German Shepherd dog called Prince, they know where things are in B & Q, they made friends with people on Henman Hill, they buy soup in cartons not in tins, they hire stretch limousines, they've got a website for their cat, they keep a torch in the back of the car. Most damningly of all they've got nothing but total respect for Annie Lennox/the Mercury Music Prize (depending on which version you're listening to). I once played this to a chap who took it as a personal attack on himself. And maybe he was right.
Here's to John Peel and his memory. And this fairly bizarre photo.
Paintball's Coming Home
Posted by Swiss Adam at 08:56

Labels: half man half biscuit, john peel, keeping it peel

Sadly I think we all know some couples like that. Great track to honour the great man.