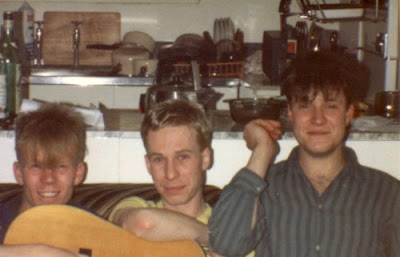 Here's another 'I was looking for that but then I found this' post. I was looking for an mp3 of West Bam's Alarm Clock and couldn't find it so did a search for 'West' and this came up- West India Company's O Je Suis Seul (remixed in 1989 by Andrew Weatherall and on the flipside by Weatherall with Alex Paterson). I wasn't intending to do another Weatherall related post so soon after the previous one but it's a go-with-the-flow time of year right now.

West India Company were an interesting mix of people, including Vince Clarke (from Depeche Mode, Yazoo and Erasure, above left), Neil Arthur and Stephen Luscombe (from Blancmange, above centre and right respectively) and the legendary Indian singer Asha Bhosle, and they set about making synth pop with Indian rhythms and instruments in the mid 80s. By '89 they were heading housewards. Weatherall and Paterson lived in neighbouring flats in Battersea and presumably they crossed paths somewhere. The Bhagwan Boogie Mix is a chuggy ambient house tune, peppered with Indian percussion and has an appearance of that 'Yep, I know that feeling' sample which Weatherall would re-use on Screamadelica. The Orient Express Mix is a bit more abstract and disembodied, more Orb-like in fact.

As you will be aware that sample was lifted from Paris Texas. Sad fact, Alex Paterson used the samples of Harry Dean Stanton clearing his throat and the "They were in love with each other" for O.O.B.E, so perhaps Alex Paterson nicked Weatherall's copy of the Paris Texas soundtrack.

They all look about 12 in that picture!

Clearly a fertile time in a block of flats in Battersea wasn't it.

I had absolutely no idea or knowledge about all of this. Every day is indeed a school day.