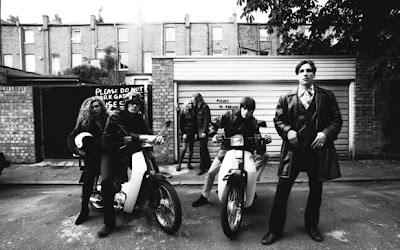 World Of Twist, Manchester's long lost turn of the 90s band, made at least three outstanding singles- The Storm, Sons Of the Stage (one of my favourite records ever) and She's A Rainbow- and an album which was badly mixed (at a cost of a quarter of a million pounds). Quality Street had some good songs on it but no matter how loud you played it, it lacked oomph. A shame since they had real potential, magnetic stage presence and a sound combining 60s pop, Northern Soul and psych with an early 90s sensibility- a definite sidestep from the Madchester sound, more like a sharper, rawer Pulp. I saw them at Manchester Academy and they were a blast, MC Shells keyboards housed in a giant shell, and spinning round newsagents signs and stage props. Front man Tony Ogden died a few years ago, one of the era's lost souls. He was devastated after the band were dropped and spent several years doing little but taking smack and watching World War II documentaries. Drummer Nick Sanderson followed the band by forming Earl Brutus but died of lung cancer in 2008. The lp has recently been remixed/remastered and is due for release next Monday, hopefully giving the record and the band the sound it needed twenty odd years ago. A second disc has radio sessions for John Peel and Mark Goodier and b-sides. This is the extended 12" version of their cover of a Sly Stone song.

In this interview clip for Snub TV they are interviewed in Withington baths, just up the road from where I grew up and where I once nearly drowned as a kid (I stuck my finger in a grid at the bottom of the deep end. To see what would happen). Proper swimming baths they were- cubicles around the edge, freezing cold, fag ends and plasters floating in the chlorine.

Damn -you got me crawling out of my lurking (sea) shell! One of the truly great almost bands, although one that the mainstream probably wouldn't have done many favours to. There's a fantastic gritty/kitschen-sink mini-drama or book in there somewhere. Funnily enough I went swimming on Sunday and momentarily got my toe stuck in a grille at the deep end while talking to my kids.

We saw them together didn't we? With one or more of your brothers? Or was that a different night?

many thanks for the reissue news ,amazon have next week as a release date, cherryred however say January. ive gone with amazon.could you tell me is the 'life and death remix' different or just a shorter version than the extended version from quality street cd.if it is a different version and you happen to have it lying around could you maybe help a competist out.great blog. many thanks David

I dunno David- I have Quality Street on vinyl so can't tell if it is the same mix or not. Maybe Discogs could help?

cheers for your reply swiss adam,the info I found on the w.o.t. blog 'sons of the stage 12'' - b2 life and death remix 6.03 ,sons of the stage cd life and death 12'' version 8.37.the 8.37 version was also a bonus track on the album cd along with 'she's a rainbow.nothing tells me if the remix and 12''differ in any way apart from an extra two minutes.gosh I appear to be evolving in to a world of twist anorak.thanks once again'David.
p.s off to see the Cockney Rejects tonight.

Have fun with that David. The WoT anorakism and Cockney Rejects.