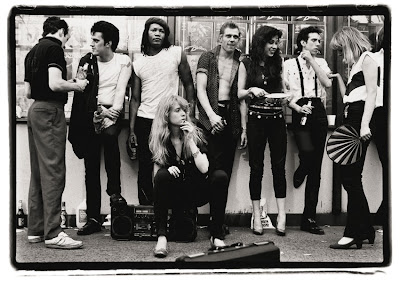 I found this photo of The Clash and various associates I'd never seen before. That's Joe on the far left with his back to camera, next to him fixer and tour manager Kosmo Vinyl, Paul Simonon centre with shirt undone and Pearl Harbour between him and Mick. Not completely sure who the blonde woman sitting on the ghetto blaster is, possibly Joe's then girlfriend (I could probably consult a book and find her name)- the one with the fan I'm pretty sure is Mick's girlfriend Ellen Foley. I also don't quite recognise the man between Paul and Kosmo but by process of elimination guess he's either one of the roadcrew or a member of The Explosions (although he doesn't look like any of The Explosions in the pictures on a Google image search). I'm guessing this is backstage in Japan circa 1982. Pearl Harbour and The Explosions supported them on their Far East tour, and the hair and clobber look very much like their get ups on the cover of Combat Rock. It's anyone's guess where Topper has disappeared off too.

In this extremely grainy, taped from Japanese TV clip Pearl fronts The Clash on Wanda Jackson's Fujiyama Mama and then sticks around adding vocals while they play their cover of The Equals' Police On My Back and White Riot.

Here's that original of Police On My Back by The Equals...

Police On My Back

I didn't knew till now, that Ellen Foley was engaged with Mick Jones. First time I heard something bout her was the collaboration with Meat Loaf. She made a nice record under her own name and then she went out of my view. Thank you for remember me at Ms. Foley. Have a nice easter weekend.

Ellen Foley's Spirit of St. Louis album is basically an collection of Sandinista era Clash songs which were not fully fleshed out and the idea of contributing to her album appealed to them. the track MPH from that album would have been a stonker if The Clash had recorded it. Listened to along with Sandinista you feel the logical progression or compliment of the songs. Foley can tend to be a bit overblown vocally, but that could be blamed on her Steinman/Meatloaf background.

My better half has a t shirt with this picture on, we've been trying to figure out who was who for a while now, you've filled in some blanks!

Glad to be of service Bossman.

Stumbled across this the gentleman with the locks is Raymond Jordan and the young lady seated Gabrielle Salter, mother of Joe's two daughters. The photo was taken while waiting to be filmed in" The King Of Comedy" on Broadway, NYC outside Colony Records, just down from the Brill Building.