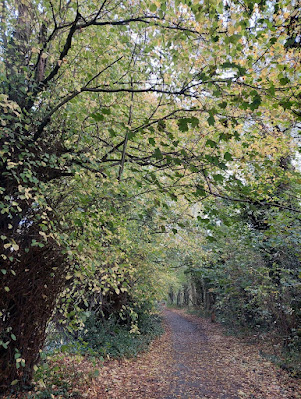 I think I want to try to keep the blog going although how that might work in reality I don't know. It's useful to have a distraction and something to focus on and writing some of this stuff down helps me.

There's all sorts of things to organise now. Part of last week was taken up with the bureaucracy that takes place following a death which you don't consider until it happens- the registrar, death certificate, funeral director, informing various government agencies (Isaac was on Universal Credit and received Disability Living Allowance. Lou received Carers Allowance. These need to be stopped. Who wants to be overpaid and then involved in having to deal with government departments about that kind of thing?). So maybe coming on here and writing about other things, but likely still to be about Isaac, will help.

Isaac's deafness meant he wasn't much bothered about music but there are songs indelibly linked to him for me. Two weeks ago I posted on his birthday and wrote about North Country Boy by The Charlatans, a song I haven't dared listen to yet. Last week Martin posted Do You Realise?? by The Flaming Lips, a song I love and even just hearing it in my head makes me well up.

There are two songs closely linked to the first few days he had at home when he was born in November 1998. He spent the first two weeks of his life in hospital, rushed to Special Care immediately after birth and touch and go for a week. We finally got home at some point in December. Grandaddy's A.M. 180 had been one of the songs on a free CD that came with a music magazine I'd bought while he was in hospital. I hadn't played the CD and this was one of two songs that soundtracked those first few days at home with him

Funny though how music and songs can shift- back in 1998 it was the keyboard refrain, the guitars and the nursery rhyme quality this song had that made it resonate with Isaac. Now that's he gone, the lyrics seem to take on a new significance.

Blog if it helps, take a break if it helps. I guess this won't be the only song (or book, or film, or place, or anything) that takes on a new significance now, and if it helps to unload that feeling, to commit it to words and, by doing so, acknowledge it, well, we'll be here to unload to. Do whatever you need to do to get through. Most of all, take care, Adam.

There will still be a group of people who have always been interested in what you've got to say and will keep checking back, but you do what's right for you mate. If you feel like writing we'll welcome it, if you don't then people will understand. If you feel the need to unload then do that too. Whatever gets you through the bleakness is fine. But I'm sure everyone who responds to your posts here will be thinking of you all.

I've been out of the loop for a couple of weeks and am only now learning this awful news. You've always written about Isaac with such warmth and affection that whenever he made an appearance on the blog it almost felt as if I was catching up with an old friend. I can't begin to imagine the pain you, Lou and Eliza are going through. I'm so very sorry for your loss Adam.

Echo the previous posts Adam. This blog has always been attuned to my musical ear, so dropping by always feels like poking my head in and seeing what's going on. That won't change, whether there's nothing going on, or sporadic, cathartic musings now and then, or radio silence for many moons. You have to do what you have to do, the only thing of any importance is that you and your family get through. I know what you mean about Do You Realize? My bottom lip starts trembling when the drums first come in....

As has been said above - it's about whatever feels right for you at any given time, we are always here to read your words and listen to your music if/when it suits you to post them and very grateful if they help you to get through in any way at all.

I'm grateful and proud to be a member of your audience. We'll be here as long as you want us to be. Thank you for sharing your words, your wisdom, and the music you love.

A lot of great comments above and I echo all of them. Whatever helps, even a little, helps.

Thank you for sharing, Adam, thinking of you all every day. Best wishes.