And It Wasn't A Dream 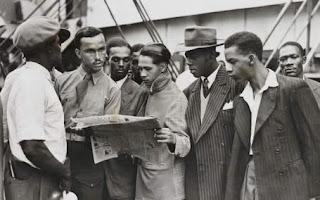 Some more music from the late 80s/early 90s Manchester playground, this time the Ruthless Rap Assassins (from those days when the music press used to wring its hands about whether there could be such a thing as UK hip hop-seems absurd now doesn't it. A year ago Dizzie Rascal was preparing to perform at the London 2012 Opening Ceremony). This was probably their best known moment, detailing the experiences of the group's parents and grandparents arriving in the UK- 'and it wasn't a dream, it was a nightmare'- based around a Cymande sample. Great stuff and much under-rated, this is an important record. Kermit later showed up in Black Grape.

And It Wasn't A Dream

The video shows Ruthless Rap Assassins in and around Hulme, including the infamous crescents.

I loved this record. Up there with the best of Linton Kwesi Johnson.