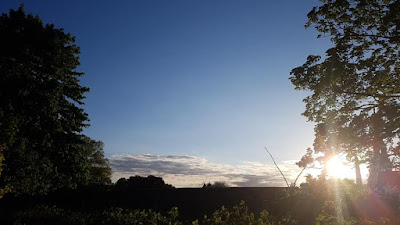 A return to Notts duo Coyote today and a song that recently featured at Dr. Rob's Ban Ban Ton Ton blog- since hearing it there I've become mildly obsessed with it so felt I had to post it here too. Coyote deal in a shuffly, beach bar Balearica, music for holidays, sunsets and dancing but music also for listening to, encouraging the mind to wander, for moments of introspection. The album, The Mystery Light, is out in the summer and this song will be the closing track. Clicking play now will improve your Tuesday no end.
A slightly fuzzy, fat bassline and a bed of FX, an acoustic guitar picking out a gorgeous melody. Over this the sampled voice of Alan Watts talks about those people who don't want to join in, the individuals, non- conformists and outsiders who don't want to play the game that society has set for them- 'you don't have to join, you don't have to play the game'. Given that The Outsider was one of Andrew Weatherall's first pseudonyms when writing the Boy's Own fanzine back in the 1986- 1989 and that he was someone who did exactly what Alan Watts is talking about, it's fair to assume this song is a tribute to him and the inspiration he provided for others.
Posted by Swiss Adam at 08:00

That is beautiful. I've arrived a little too late to boost my Tuesday, but Wednesday is already looking like a good day. Perfectly suited photo, too.

Speaking of Lord Sabre, I've uploaded a little album of 10 songs on my blog. Not intended as an ICA, but a small thanks for your decades of Weatherall dedication and championing. Happy birthday, Adam!