Gorillaz In The North 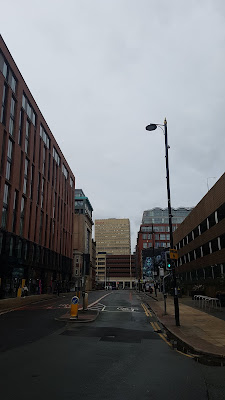 New Order's recent releases (and by recent I mean those since 2015's Music Complete) haven't always convinced me. It sounds like New Order but with all the edges sanded off and smoothed out, the tension and pioneering spirit of their greatest art lost after so long in the saddle. I suppose it's to be expected- no one can keep their edge for that long, unreliable technology and stubborn independence gets traded in for gear that works and financial security. At some point in the process (I'm dating this to the recording of Republic in 1993 and Rob Gretton's absence onwards) there was a power struggle that was won by Bernard. He took control of the creative process and song writing, the recording and production. Peter Hook's departure is well documented and there's no need to dig over that again but his bass was one of, if not the, key sounds of New Order- the bass guitar as lead instrument, the riffs and runs played through that chorus pedal and those amps. At some point Bernard decided he wanted a bass player who followed the guitarist and who just played the root notes.

Thankfully Hooky pops up here and there from time to time, bassist for hire, his Viking bass sound immediately identifiable on two superb singles by The Liminanas (Garden Of Love and The Gift). Last year he slung the bass around on a single with Damon Albarn's Gorillaz, part of their monthly 2020 digital release campaign. Aries, Hooky's growl at the start and then the bass runs throughout, beamed in seemingly straight from New Order's Cheetham Hill rehearsal studio in 1986, seem to contain the spirit of New Order as much, if not more, than anything on Music Complete.

After Republic I never really sought out New Order new releases and what I heard didn't really do anything for me.

I smile every time I think of MES wandering on to the stage at Glastonbury, lyric sheets in pocket and single gloved hand. Also Albarn's face is a picture on a couple of occasions when he's wondering what Smith is going to do

I wondered recently if their post- Republic work could make 1 good late period New Order album. This is where I got to-

Others may disagree but I was forced to conclude that the answer was 'no'.

Barney's not celebrated as a lyricist but Krafty's are particularly pish. I would only rate the last one on your list and only due to Andrew Weatherall's contribution

Yep, Krafty's lyrics are poor. I have to say I think Crystal is really good.

The current single, Be A Rebel, is everything but rebellious. SA you hit the nail on the head with their sound sounding like edges have been sanded off. Perfect.
Listening this past year to Hookys various takes on NO and JD songs has been one of Lockdown's few positives.

Been forever since I bought a new release from New Order. Meanwhile, the Hooky appearances have been quite interesting.