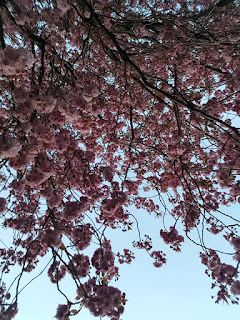 I go four years without an Inspiral Carpet turning up here and then suddenly the bassist turns up twice in a matter of months. Martyn Walsh, bass player for the Oldham five piece, has formed a project with Simon Lyon and released a song/ single with a bunch of remixes. The original version of Afterglow is a throbbing, pulsing piece of 80s post- punk, a dash of Hooky found in the bass grooves and a touch of Sisters Of Mercy in the vocals. It is, and I mean this as a compliment, perfect for the Thursday night indie/ alternative night at a club you wouldn't go near any other night of the week, a slice of mid 80s indie- disco for 2021.
The remixes come thick and fast and can be found at Bandcamp.  The pick of the bunch is from Hardway Bros, the nom- de- plume for Sean Johnston, an eight minute electronic dub- drum pads, plenty of bounce, some breathy backing vox and a female lead vocal that keeps coming back to the line 'sunset's so low', and then that bassline coming back in, straight from Lowlife. Released on MFS, the Berlin based label of Mark Reeder (Factory's man in Berlin in the 80s and member of Shark Vegas).
Posted by Swiss Adam at 08:00

The Sink Ya Teeth Remix made me very happy!
The original track is pretty fantastic - once I got ELO's Don't Bring Me Down Post Glam beat out of my head.

Great stuff! Echorich, you've planted the ELO reference in my head and I can't get it out now...!