It's Going To Be A Fine Day Tomorrow 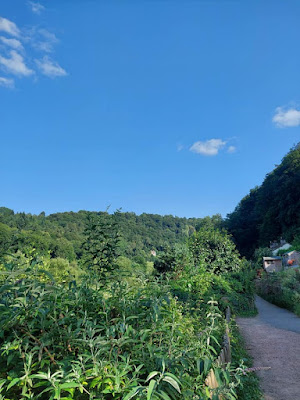 This is a 1992 remix of Orbital's Halcyon, spliced with Opus III's It's A Fine Day by Michael Anderson, both songs I adore, standout songs from the early 90s when dance music seemed awash with possibilities and the promise of being the soundtrack to a new decade/ world.

Orbital's Halcyon borrowed from Opus III, a backwards piece of vocal from singer Kirsty Hawkshaw (who also starred in the video as a housewife losing it). The song Halcyon was dedicated to the Hartnell brothers' mother who had been addicted to the tranquiliser Halcion for many years, so the video is at least partly her story. The full eleven minutes of Halcyon (On + On) are a peak in Orbital's back catalogue, a back catalogue not exactly short of peaks.

Opus III were Kirsty Hawkshaw plus three producers- Ian Munro, Kevin Dodds and Nigel Walton. All also members of Spiral Tribe so their rave/ outsider credentials were second to none. It's A Fine Day was a big hit in 1992, crunching drums, rave keyboards and Kirsty's lighter than air vocal proving irresistible to the record buying public- hypnotic, trancey, loved up but with a slightly off kilter edge.

It's A Fine Day

It's A Fine Day's slightly off kilter edge comes perhaps from its origins in early 80s Hulme, part of Manchester just south of the city centre, where the concrete housing development known as the Crescents had been abandoned by the residents and families it had been built for and taken over by a more bohemian set of people. The Crescents were described as 'Europe's worst housing stock' but in the 80s were the home to all sorts of people looking for an alternative place to live. Edward Barton, a Manchester based poet and musician, wrote It's A Fine Day while he lived in Hulme. The song's first recorded appearance was in 1982 on the mini- album Jane And Barton, the words sung by his friend Jane Lancaster- an unsettling piece of acapella.

It's A Fine Day

I saw Edward Barton a couple of times in the mid-eighties and the phrase "completely nuts" doesn't begin to cover it. Think he brought Jane on at one point to very sweetly warble a song that went "I've got no chicken but I've got five wooden chairs" if memory serves. But it was brilliantly mad and I really enjoyed it.

Great tribute album to Barton from 1989, Edward Not Edaward, that features the like of A Guy Called Gerald, Inspiral Carpets, Ruthless Rap Assassins and these guys. https://youtu.be/kyQ5NJWq9UE

I saw Edward Barton at the International, He had his huge wooden chair & climbed into the roof space to sing a few songs, I think he played his guitar with a tablespoon

'I think he played his guitar with a tablespoon' is exactly the sort of comment that makes me laugh out loud.

I la-la-la-la-la love these songs. Halcyon is among Orbital's finest work, although the pair of Raddicio 12"s is pretty unbeatable in its entirety.