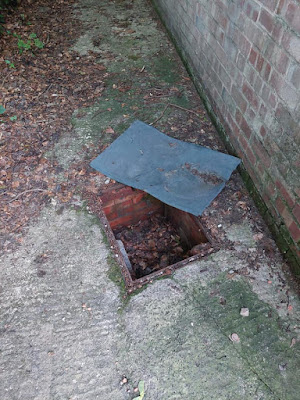 Down by the River Wye in Lower Lydbrook where we stayed the week before last you can drop down from the road and head down a side road. We were looking for a footbridge which a map told us crossed the river somewhere near where we were staying (an old railway bridge, a remnant of the area's industrial past). As we headed away from the road we passed this hole in the ground, its cover pulled away. It didn't look very deep but I wasn't keen to put a foot in and find out whether the leaves at the bottom were solid. Following the track to the left we found this, a disused and derelict cable works. Corrugated iron peeling back from the bolts, broken windows, boarded up windows, graffiti, all a bit overgrown. Walking on past the undergrowth were some steps leading to a door which was swinging open- I'd say swinging invitingly open but I've seen enough films to know that people who go up those stairs and through open doors like that don't tend to come back. 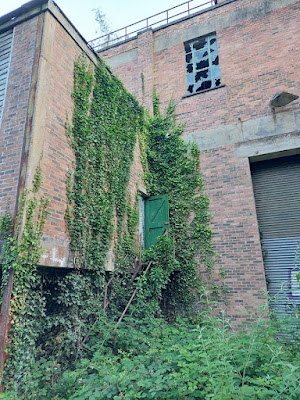 Walking past two evenings later the door was still open, everything exactly as it was previously. The urge to go up the stairs and at least look through the door was strong but I kept walking. Weirdly I dreamt about this derelict cables works and its door the night before last. Which leads me nicely to this...

This is from a new EP by French artist Margee, led by In My Sleep and Wrong Dream, a pair of sleek, low slung, dancefloor oriented tracks, layers of bass and synths and melodic toplines. Sean Johnston's Hardway Bros turn up on the remix of Wrong Dream, an eleven minute, heavy duty, dubby, glide- by job built around a massive, hypnotic groove, appropriately subtitled Cosmic Intervention.

What an interesting building, slowly being reclaimed by nature by the look of it. You did well to resist!
Nice tune too.

I find myself drawn to derelict buildings in a similar way. I might trace this back to my childhood, when I played in an old derelict chapel near my house (my brother eventually bought it and turned it into two houses). I could have been an urban explorer in another life...

Oh yes, I too love derelict buildings. What is it about their dilapidated state which is so appealing? They seem to take on more character and maybe we like the fact that they often leave us with unanswered questions - an air of mystery, sometimes the thrill of something darker. There's great beauty in decay of any kind I find... old bones, old wood, rust, etc. but buildings are especially captivating. Wish you could have gone inside but it's definitely preferable that you were able to report back unharmed!
Like the track too.

When we were kids there were some derelict houses near us, huge Victorian semis with cellars. We were in there all the time, once crawling around in the cellars on our hands and knees in the dark. Scary then, terrifying now.

I don't know exactly what it is C but there's definitely something about derelict buildings that attracts me. The sense that these huge markers humans have put on the landscape are not as permanent as we like to think maybe.

Where I grew up there were loads of abandoned and derelict houses, a disused railway line and tunnel and an air raid shelter, all of which was simultaneously compelling and frightening. Your final comment above hit the mark, Adam. I'm fascinated by the way that nature reclaims and breaks down these buildings and objects that we have designed to 'last'.

Great choice of music, too. I featured it last Monday amongst a trio of new music purchases and I've listened to it a fair bit in the past week. Like you, the Hardway Bros remix is the standout (and gave my post its title), but I also really like the remix by DJ Nature aka Bristol legend Milo from the Wild Bunch.