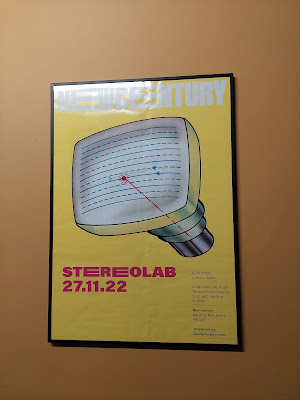 If ever anyone was ever meant to play Manchester's recently restored 1963 venue New Century Hall it is surely Stereolab, whose retro futuristic music is perfect for a 60s version of the future, the white heat of technology and all that. I got an offer of a ticket from my friend Darren (the second this month, so many thanks Daz). On Sunday night we were down the front waiting for the band to appear. They arrive on stage at nine, the five members looking very much like a group of teachers on Inset day who took a wrong turn out of the conference centre and ended up on stage by mistake. The songwriting pair Tim Gane and Lætitia Sadier are very much the front pair, Lætitia welcoming us 'to the new century', chatting between songs, singing and switching between synth and guitar. Tim is in front of us with guitar and pedals. The opening song is Neon Beanbag, synths bleeping away, keys chiming, motorik drums and Lætitia's sung/ spoke vocals, 'I'm sad to see that you are sad'. After that there are a few technical issues involving leads and synths and missing plectrums that need sorting and then they're off into a twelve song set that is lapped up by a crowd spanning all ages, teenagers to sixty- somethings. 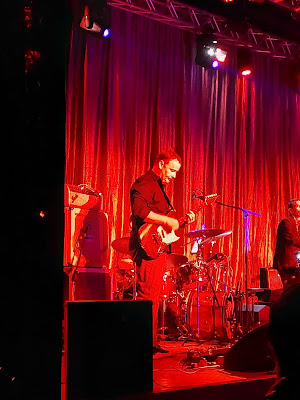 There are times when they sound very New York, a splicing of Silver Apples modular synth psyche and the feedback and organ of The Velvet Underground, Tim strumming gently but then a stamp on his pedals and it's all feedback and clanging notes. The funk, bossa nova and exotica influences are all in there too, a skillful blend of the obscure and the pop. This song from the 1993 mini- album from The Groop Played Space Age Batchelor Pad Music is aired early on, between Eye Of The Volcano and Refractions In The Plastic Pulse.
U.H.F.- MFP 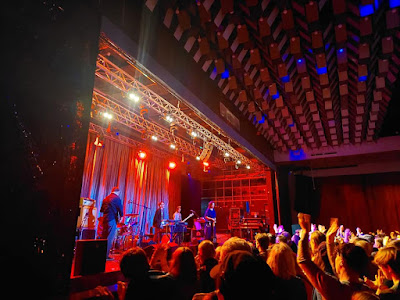 As they build to the conclusion, the drums get faster, the synths wiggier and the guitars more scratchy, it all coming together in bursts of noise and sing- song vocals, red and purple lights and the gorgeous ceiling of the New Century Hall reflecting back at the groop who finish with Super- Electric (from way back in 1991). Returning for an encore, after the briefest of disappearances (there's a 10.30 pm curfew so there's no time to be wasted), they blast into Allures and power straight into French Disco with its electrifying drones and guitars, synths and a call to rebellion and not giving into life's absurdities that is French Disco'ss two word chorus, 'La resistance!'. One  more song, Simple Headphone Mind, from the 1997 collaboration with Nurse With Wound allows them to rock out even more, channeling the spirit and sounds of West Germany in the late 60s/ 70s, filling the hall with cosmic, avant- pop. 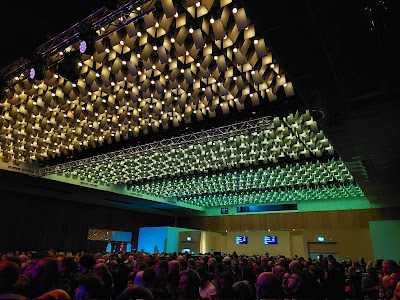 "A group of teachers on Inset day," very good.

Really want to see something at that venue, where I've stood on the stage presenting while employed by the Co-op some time ago. But never got Stereolab...

Speaking as a teacher and veteran of dressing down for Inset Days for 28 years, I feel I can testify here Martin.

Great that you've stood on the stage Tom. Hope you get to see a band there soon. I've been twice now, it really is a superb venue.