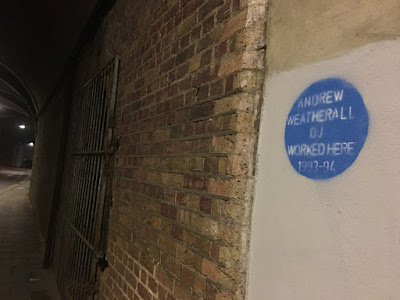 Today would have been Andrew Weatherall's 58th birthday. During lockdown a crack team of urban art guerrillas have been painting blue plaques on the walls of significant venues he played or worked at- above is Happy Jacks on Crucifix Lane near London Bridge, a club in the railway arches that hosted Andrew's Sabresonic club night in 1993- 94. The club was lost to the market forces of gentrification a few years ago. Below is the entrance to Andrew's studio at Scrutton Street, East London, a space he shared with several other artist, people such as Daniel Avery, Richard Fearless, Scott Fraser and Timothy J. Fairplay ('We are the Axis', he sang on The Asphodells album, celebrating the basement studios and it's occupants), another place swallowed up by property developers. More power to the shadowy team behind these spray paint tributes (although their names must remain a secret). 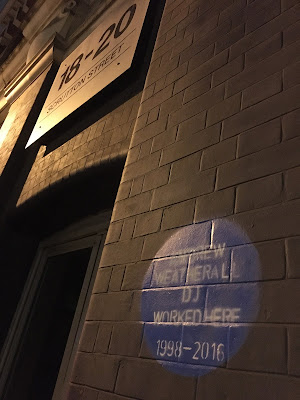 To celebrate Andrew Weatherall's birthday and life here are two remixes separated by two decades, both part of what he definitely didn't see as a career, more a series of happy accidents and moments where when offered a shot at the limelight and the big money, he backed away into the shadows. These two remixes, from 1991 and 2013 respectively, share a sonic palette and show how the influences he was bringing to his early works were still informing his music years later even though he'd mined several deep musical furrows in between.

First this one where he remixed Airstream, a 1991 progressive house chugger built around a rhythmic vocal sample and chunky drums. The entry of the bass after one minute is a supercharged moment, followed by the arrival of more drums, percussion, snatches of guitar, a didgeridoo and whatever else happened to be lying around the studio/ on the mastertapes. Even in the halcyon days of 1991 no one else was turning out records like this, more ideas per square inch than some groups mange in an entire album. Airstream contained Cymon Eckel (a longstanding friend of Andrew's and original member of the Boy's Own team) and Johnny Male (once of 80s Manchester band Metro Trinity who I keep meaning to write about, a band who released one record in 1987 and also contained future members of Sub Sub/ Doves. Johnny went on to Soul Family Sensation and Republica). The Nine O' Clock Drop of the title refers to Andrew and Cymon's trips nightclubbing in the 80s and optimum ingestion time.

This one came out in 2013 but is a remix of a song originally released in 1982 by Blue Rondo a la Turk, again built around some rhythmic vocals, some looped humming and chanting by the latin/ jazz/ pop ensemble and underpinned by a huge, fuzz bassline and punchy drums. The remix was released as part of a Blue Rondo retrospective called Chewing The Fat, and is the sort of thing that got Andrew and friends fired up by music, dancing and clubbing in the first place.

Blue Rondo a la Turk are also known for being the act The Smiths supported at their first ever gig at The Ritz in Manchester, a changing of the guard moment in Smiths mythology. Two members of Blue Rondo went on to form Matt Bianco who were memorably called 'a bunch of wankers' on a live phone on Saturday Superstore. Such are the moments pop culture is built on.

I love the Blue Rondo A La Turk album. Sure, they were elitist clothes horses, but it's such a brilliant album, and the Weatherall remix you put up here is a delight. I have it on vinyl purchased at the time but the reissue, with it's bonus remix CD released in 2013 made that a must buy as well.
Happy birthday Audrey...

Nice to finally see a mention of the late great Weatherall. Took you long enough.

Sooner or later KeepingItPeel, it was inevitable

A reference to the man :
https://www.lagasta.com/premiere-max-essa-matinee/
ben