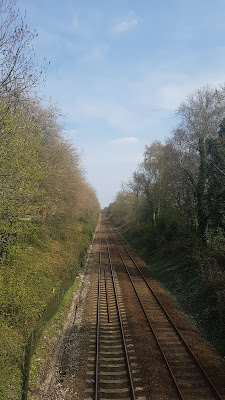 More krautrock for Montag this time with Faust. West German bands in the early 70s were fired up on the zeitgeist- revolutionary politics, communal living, music as an anti- establishment activity- and those aspects of it peculiar to life in West Germany- the shadow of the Nazis and their parents' generation, a country divided by the Cold War and a city literally divided in two, the FRG's position as the frontline in any war that might break out in Europe between east and west. Faust were experimental, improvisational and challenging, making music out of cut ups and collage as well as more conventional band based, progressive rock music. This song, from their 1973 album Faust IV, is a pretty chilled out affair, a drifting lullaby built on top of some distorted bass and a slow drum pattern, over which Rudolf Sosna sings gently 'Jennifer you red hair's burning/ yellow jokes come out of your mind'.

Yep, it definitely has an edge

Jennifer is one of those Krautrock songs that reminds me of how much I love PiL's Metal Box/Second Edition. So much of what goes on in Jennifer informs everything I love about PiL's second album.