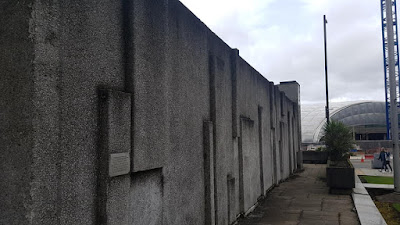 Posts this week featuring Unkle and David Axelrod have pointed me in the direction of DJ Shadow. Shadow was a big part of Unkle in the late 90s, the Psyence Fiction album especially, and his album Endtroducing... is one of the 1990s defining records, a four sided tribute to crate digging, sampling and instrumental hip hop created uisng nothing but an Akai sampler and drum machine, a pair of turntables and an early version of Pro Tools.

Shadow followed Endtroducing... with a 12" single called High Noon, a twangy guitar and drums from Curtis Knight (who played drums for Hendrix). At the time there was a sense of anti- climax about this release, after the ground breaking sounds of Endtroducing... in '96 but listening to it now it sounds spot on.

This one from 2003, GDMFSOB, is a breakbeat powered monster with words from Roots Manuva and Unkle on remix duties.

Definitely agree High Noon was considered an anti-climax due to the jaw dropping quality of his early EPs and Endtroducing, but it was solid and, shorn of the need to retread, I really enjoyed The Private Press. However, I still play Endtroducing a good couple of times a year, and, to my ears, it still sounds like music from the future, not a record turning 25 years old.