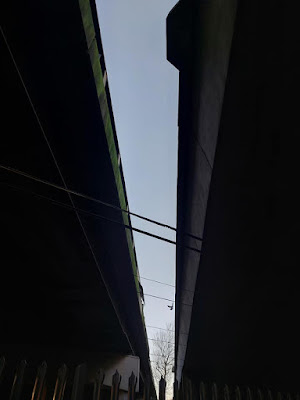 Red Snapper's new album, Everybody Is Somebody, came out at the start of the month and the band have been touring to support it for the last two weeks. The album is a real return to former glories. Back in the 90s a run of EPs (Swank, Snapper, Hot Flush) and subsequent signing to Warp led to their Prince Blimey album, a glorious blend of jazz, funk, surf, Afro, dub, breakbeat, trip hop and whatever else tickled their fancy, and the superb Reeled And Skinned, live instruments and electronics brought together. The trio of Ali Friend, Rich Thair and David Ayers brought in other players and vocalists as and when required. They split up for a while in the 00s but reformed in 2007 and have been playing and recording ever since (with a detour into post- punk by Friend and Thair as NUMBER in 2019).

The new album sounds like a musical stew where everything they've previously done has been brought to the boil, all the influences and experiences fed into fourteen tracks (ten if you buy the vinyl). Album opener and single last year The Warp And The Weft features a very laid back rap by Natty Wylah, a downtempo start to an album that picks up the pace afterwards- there's a run of songs, largely instrumental, that run through the gamut of the group's styles and influences but it all hangs together, focussed and engaging. It also sounds like they had a lot of fun making it.

Some highlights- Tarzan is amped up funk, parping horns, rattling drums and clipped guitar. Tremble starts out with picked acoustic guitar and jazz bass, then violin and cello, and sweeping strings swooping in before the twin vocals take over. Equals is out there sci fi funk, a piano line over pumping rhythms and electronics, the future funk of the 90s back in orbit. Out Of Focus has a twangy, Bond style guitar line and fantastic live drums with dub horns, not a million miles from A Certain Ratio and their recent noir funk revival.

Black Sea is a psychedelic soundscape, skittering drums over a distorted synth or organ line, rimshots and echoes bouncing round as the wiggy melodies evoke sunsets on Jupiter or jazz clubs in some outpost of a distant galaxy.

The laid back trip hop/ rap returns with the slightly surreal Albert's Day Off.  On Detach they head back to the soundtrack, sci fi, jazz, a song that wouldn't sound out of place on Sabres Of Paradise's Haunted Dancehall.

The album, fourteen tracks digitally or the slimmed down ten on vinyl, can be bought at Bandcamp. Highly enjoyable, experimental and accessible, and highly recommended.