Life Is Much More Simple When You're Young 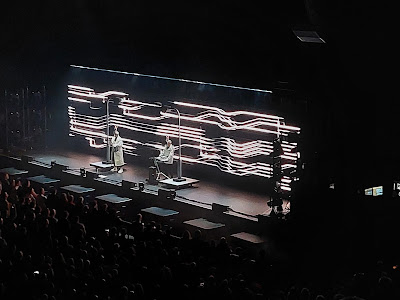 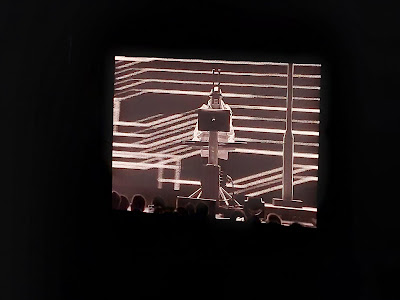 Pet Shop Boys played Manchester Arena on Friday night- there aren't a huge number of groups who can tempt me into arenas but Neil and Chris are one. The tour is billed as Dreamworld, a greatest hits show, and they do not disappoint, hit after hit, song after song, a perfect demonstration of the art and sheer majesty of pop music. Noel Coward's quote about the potency of cheap music runs through my head a couple of times (not that the Pet Shop Boy's music comes across as cheap in any way) but it is extraordinarily potent. I'm in tears a couple of times- this keeps happening at gigs at the moment, lines and songs triggering me instantly. So much of a Pet Shop Boys gig/ show is about the stage, the set and the spectacle and there's plenty of spectacle here tonight but it doesn't overshadow the songs and ultimately it's the songs that shine.
The duo come on to a full, pretty much sold out arena, in big coats and headdresses. They occupy the front third of the stage, a big screen blocking off the rest of the stage. Under a pair of stylised street lamps on wheels, Chris begins prodding his keyboard and Neil takes us straight into Suburbia. The projections behind them are in a constant state of right to left movement giving the set a real sense of motion, the graphics whizzing by as Neil and Chris largely stand still. Suburbia segues into the thumping dance pop of Can You Forgive Her? and without a pause we're into Opportunities. From thereon in it is clearly going to be nothing but hits, one after the other, usually without any breaks between the songs, a constant seamless flow of words and music. Their cover of U2's Where The Streets Have No Name lights the place up even further, that sequencer line pumping through the giant barn we're in sending waves of energy into the crowd and back again. For some songs, Rent (played early on) and West End Girls (much later), the projections become distorted, chopped up versions of the original videos- the young Chris Lowe with naval hat and duffel bag steeping off the train from the Rent video and the pair of them in the streets of London for West End Girls, a moving ode to the passing of time and youth becoming middle age. The quality and range of their back catalogue is so high- one of their 90s peaks, So Hard, is dispensed early on, Chris' massive rave riff filling the arena and Left To My Own Devices, even bigger than the recorded version with Trevor Horn, that superb line about Che Guevara and Debussy delivered with deadpan aplomb. 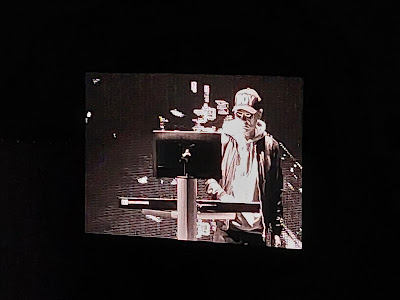 The stage gets opened up for the middle section, the screen raised and three extra musicians waiting for them on risers- drums, percussion and keys- and they're straight into the latin rhythms crossed with melancholy of Bilingual and Se a vida é (That's the Way Life Is), the first lump in the throat for me, the line about 'Se a vida é/ I love you/ Life is much more simple when you're young' hitting home. The beautiful Balearic pop of Domino Dancing is followed by some 21st century PSBs- New York City Boy, Monkey Business- and Neil straps on an acoustic guitar for the relationship dissection of You Only Tell Me You Love Me When You're Drunk. Then we're slung back to the 80s- Love Comes Quickly and Jealousy. From this point it's smash hit overload- You Are Always On My Mind, a superb Heart, their wonderful cover of house legend Sterling Void's It's Alright, Go West and a climatic It's A Sin. For the encore the stage is reduced again, the screen leaving the duo at the front. West End Girls, poignantly backlit by their 80s video and then Being Boring, their masterpiece, the projections whooshing from front to back now, lights receding into the distance and Neil's time shifting lyrics about loss, the passing of time and friendship setting me off again- 'all the people I was kissing/ Some are here and some are missing... But I thought in spite of dreams you'd be sitting somewhere here with me'.

What a setlist. Some night, by the sound of it.

Saw them on Sunday in the O2 Greenwich - absolutely spectacular. Spot on review Adam.

Great review of the gig. And I think many people should watch them live not only for bringing back great times.

Ah, one of those where I wish I'd been there. The Pet Shop Boys one of the few artistic lodestars I've followed ever since I was 11 who've never let me down. The other two? Alan Moore and Viz comic...