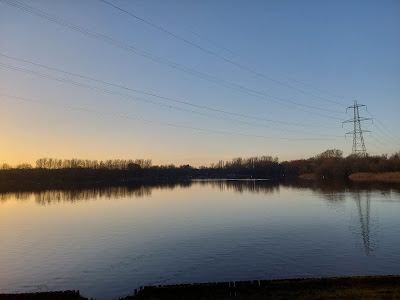 Neu!'s Hallogallo was the opening song on their self titled debut album, released in 1972. Michael Rother and Klaus Dinger formed Neu! after leaving the proto version of Kraftwerk the year before and began recording as Neu! with Conny Plank at the production desk as a duo, Dinger on drums and Rother on guitar. Hallogallo, all ten minutes of it, pretty much defines what has become known as the motorik/ krautrock sound. The other six songs on Neu! (the album) all have their merits but Hallogallo is the album's truest statement- the relentless, gliding drums, 4/4, uninterrupted and endless ('endlose gerade' according to Dinger- endless straight) with Rother's melodic, soaring, cosmic guitar lines layered on top. Rother has likened his guitar playing to the flow of rivers, the result of growing up and living near rivers. He was born in Munich and spent part of his early life in Wilmslow (not far from here, a Cheshire town on the outer fringes of southern Manchester's furthest reaches) and also in Karachi (where Pakistani music would influence his playing) before returning to Dusseldorf. I always think of Rother's guitars and their fluid forward motion as being like trains or motorways but the river references makes sense to me.

Hallogallo is perfection. If Neu! had recorded nothing else, Hallogallo would be more than enough. When it plays time disappears as Dinger and Rother play their eternal, harmonious groove. I can always click back to the start or return the needle back to the beginning of the record. If ten minutes isn't quite enough for you a helpful Youtube user called faxfaxfax has uploaded a much longer version, a spliced together Hallogallo playing almost endlessly, in a ten hour loop.

A genius idea. I'd love to have this as a soundtrack to a working day. My productivity would go through the roof.

Wonder what the longest anyone's got through the 10 hour version is.