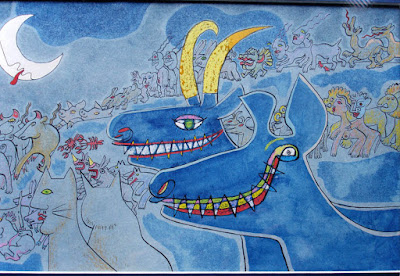 I've picked up Drew's Monday Long Song challenge with a song that according to my sources blew the lid off the at Convenanza last weekend. Frankie Goes To Hollywood had several secret weapons- Holly Johnson was a superb, subversive frontman; Trevor Horn's productions were stunning- loud, pulsing, bright and imaginative; they made good use of the 12" format to put out mixes, remixes, alternate versions and cover versions. Their 1985 single Welcome To The Pleasuredome was supposed to be their 4th number 1 single (it wasn't. Phil Collins and Phillip Bailey's Easy Lover kept them out). The lyrics were inspired by Coleridge's Kubla Khan, a poem I can still recite from memory having learnt it at school, around the time this single came out. This 12" version, the Fruitness Mix, is a monster, a jawdropping moment in a career full of them. The spoken intro is by actor Geoffrey Palmer, reading out Walter Kaufman's 1967 translation of Nietzsche's The Birth Of Tragedy (in full below).

The extended spoken word section over none more 80s synths, the drawn out arrival of the kick drum and then the transition into the song at 3 minutes 30, followed by the long disco mix, make this version over 12 minutes long and you've got to admire the sheer, brazen, we'll-do-what-we-like attitude and the knowing pretentiousness of the whole thing. It's also a great dance record.

Welcome To The Pleasuredome (Fruitness Mix)

I've always enjoyed the video with the lads stealing a car and ending up taking part in all sorts of fun and games at the carnival. There goes the supernova. We're a long way from home.

Under the charm of the Dionysian
not only is the union between man
and man reaffirmed, but nature
which has become alienated,
hostile, or subjugated, celebrates
once more her reconciliation with
her lost son man. Freely, earth profits her gifts,
and peacefully the beasts of prey of the rocks and
desert approach.
The chariot of Dionysus is covered with flowers and
garlands, panthers and tigers walk
under its yoke. Transform Beethoven's "Hymn to Joy"
into a painting. Let your imagination conceive the
multitudes bowing to the dust, awestruck -
then you will approach the Dionysian.


Now the slave is a free man, now all the rigid
hostile barriers that necessity!
Caprice or "impudent convention" have fixed
between man and man are broken.
Now with the gospel of universal harmony, each one
feels himself not only united, reconciled, and fused
with his neighbour, but as one with him, as if the veil of Maya
had been torn aside and were now merely fluttering
in tatters before the mysterious primordial unity.
In song and in dance man expresses himself as
a member of a higher community, he has forgotten how to
walk and speak and is on the way toward flying into the air,
dancing. His very gestures expresses enchantment.
Just as the animals now talk, and the earth yields milk
and honey, supernatural sounds emanate from him
he feels himself a god, he himself now walks about enchanted
in ecstasy like the gods he saw walking in his dreams!
He is no longer an artist, he has become a work of art
in the paroxysms of intoxication the artistic power
of all the nature reveals itself to the highest gratification
of the primordial unity. The noblest clay.
the most costly marble, man, is here kneaded and cut, and to the
sound of the chisel strokes of the Dionysian world of artists
rings out the cry of the Eleusinian mysteries
Do you prostrate yourselves millions
Do you sense your maker, world,
Welcome to the Pleasuredome.
Posted by Swiss Adam at 08:00

I don't think I've heard that full version before, it's great. I sort of stopped buying FGTH singles after buying 4 different Two Tribes 122 singles and the album, decided I had done my bit.

I kept on buying them up to their split! I had this one and still do. I think this track has endured over time - sure the production is a bit dated, but the song is very, very strong.

Certainly one of ZTT's finest moments of "excellence in excess."
I plan on joining in on the fun for next Monday...Just have to remember to make sure the timing of the post works out for my European blogging brethren.