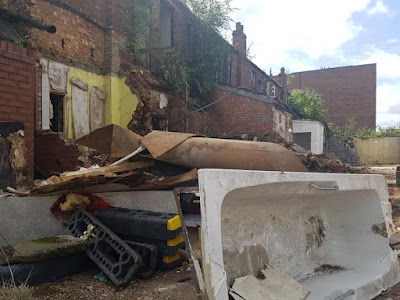 Punk trumpeter Terry Edwards and his band The Scapegoats have done countless brilliant jazz- punk cover versions. A pair of 12" singles with covers of The Jesus And Mary Chain and The Fall are both essential. He has done Sex Machine, a Napalm Death medley and a wordless version of Five Years that is as moving as Bowie's original. The Punk Tributes had versions of Bodies (Sex Pistols), New Rose (The Damned) and Version City (The Clash).

Version City isn't necessarily the obvious choice for a Clash cover, especially when taken alongside Bodies and New Rose, both loud, fast blasts of 1977. It opens side six of Sandinista!, surely the least listened to side of any Clash record. That's some people's loss because side six definitely has its merits even if it could be mistaken for stoned, studio filler. Version City is a dubby rockabilly number, starting with slowed down and speeding up weirdness, plummy radio presenter voices and FX before Joe and the band come in (there is also some guest harmonica from Lew Lewis, an exile from Eddie And The Hot Rods). It concludes in a similar way. Terry Edwards takes the main melody and funks it up on his trumpet, riffing through the song, finding all sorts of edge and bite in it. In many ways Terry's cover is as much the spirit of Sandinista! as the songs on The Clash's own triple disc 1980 magnificence.
Posted by Swiss Adam at 08:00

Really enjoyed that. Terry has played with some great bands and on some great records over the years, going right back to The Higsons, with that bloke Charlie from The Fast Show. Always enjoy seeing someone do something different with The Clash.

Definitely a fan of Terry Edwards. I wasn't aware of how many artists that I enjoy that he has contributed his skills to. He is a versatile artist. The one that stands out is his work with Tinderstick. But he's there as far back as working with Department S and Higsons in the early 80s. If you like Swing with an edge you should check out his New York New York releases.

This is excellent. Has a touch of Rip Rig & Panic about it, which is no bad thing in my book.