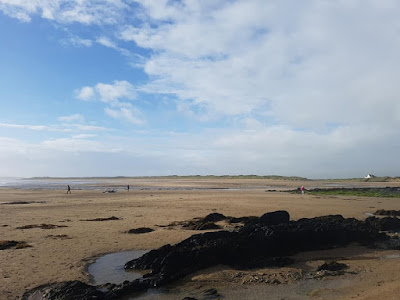 In 1974 Neu! guitarist Michael Rother visited the duo Cluster (Hans- Joachim Roedelius and Dieter Mobius) in Forst, the West German village the pair lived in. He wanted them to join Neu! but when they started playing together it became clear this was something new. Rother brought his gear with him, a Farfisa organ, a drum machine and a mixer, and they became Harmonia. Recording onto three Revox multi- track recorders Harmonia created an album that shifts between the mechanical sounds of Krautrock and the background presence of ambient. Shimmering keyboards, repetitive rhythm tracks, swirling melodies, simplicity and texture at the fore. This track, the opening one on their debut album Musik von Harmonia, is six minutes of off- kilter, weird bliss.

We're back into work today and it'll be the first time I've inside a building with more than a handful of people since 20th March. It all feels very weird. I was working full days at home from the Monday schools 'closed' through until the 19th July, teaching online lessons daily (plus plenty of Zoom meetings), and I've been into the building a few times in the last two weeks as we make it Covid secure, set up bubble areas, hand sanitising stations, new food arrangements, one way corridors and no entry signs, paint markings on the floor for staggered entries and exits and socially distanced classrooms. It really is another world we have entered and we won't know if we're getting it right until it happens, live and in real time with over a thousand teenagers. The New Normal is a phrase that's already become a cliche and at the moment none of this feels particularly 'normal'.
Posted by Swiss Adam at 08:00

I listened to this a few days ago and was impressed what kind of sound was made decades ago. An absolute groundbreaking tune.

It was alright Drew once I started to get my head around being with loads of other people.

Good luck with it all at work SA. I can't imagine how it must be for you and all others at the sharp end right now but you have my utmost admiration.