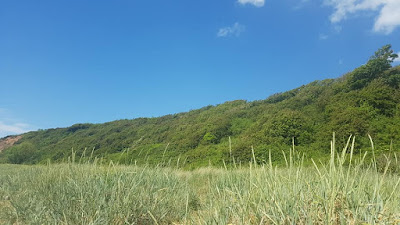 The latest issue of The Wire (number 449 dated July 2021) has a lengthy feature on the growth of internet radio stations and an A to Z of 100 essential online stations. The Wire has been dedicated to exploring and focusing on experimental sound and music since 1982 and the internet radio stations in the article cover have a global reach- from China to South America and all points in between. Closer to home, one of the stations they've recommended in their list is Tak Tent Radio, based in central Scotland and with a similarly wide and eclectic range of music on offer- everything from Turkish psyche to dub, from weird folk to obscure Swiss coldwave. This is what The Wire said.... 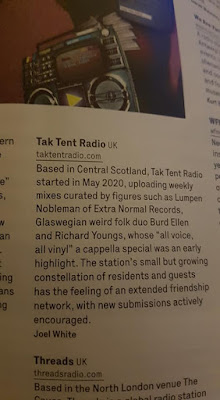 Last year Ali at Tak Tent emailed me out of the blue to say he'd found some of my Isolation Mixes done in the first lockdown and asked if I'd like to submit a mix to Tak Tent. I was stunned and flattered obviously and I've since done three mixes, one, two and three, lots of ambient, drone, Balearic, some techno, bits of dubby stuff, some Blade Runner and some Escape To New York- the sort of stuff that goes on here mainly.

There's loads to explore at Tak Tent not least the regular spots from Richard Youngs, a genuine talent, hugely prolific and maker of all kinds of outsider music- experimental avant rock and folktronica if you're looking for labels. There's one here, a show done only using 10" vinyl, and the one referred to in the magazine, an hour of all vinyl, all acapella music here.

Richard is also in AMOR, a slinky avant- disco outfit who have made some really good records in the last few years. One of the first records that dropped into my porch back at the start  of this year was their LEMUR 12", four slices of brilliance led by this song, Unravel, which I've posted before but that's no reason not to post it again- a sublime, dreamy, groove based seven minutes.