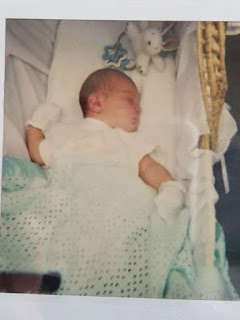 Eighteen years ago today this baby was born, our child number two and daughter number one, Eliza. Unlike her brother's traumatic entry to the world and subsequent difficulties, she was an easy birth (obviously that's easy for me to say, I wasn't the one doing the hard work at that exact moment) and she has been a joy to be around ever since. Reaching the point where both your children are eighteen or older is a good way to make you feel old but having a lively, witty, grounded and occasionally sarcastic eighteen year old around also keeps you feeling young. She has a week's worth of partying planned, from today through to Friday but today's the actual day so happy birthday Eliza.

Back in 1987 when I was seventeen The House Of Love released a single that became their calling card, the shimmering indie rock of Shine On. In the lyric Guy Chadwick (definitely not a teenager at the time, not even in his twenties I reckon) sings, 'I'm so young/ Just eighteen' before Terry Bickers' guitar soars into the stratosphere and the chorus kicks in, 'she/ she- she- she shine on'. So, keep shining Eliza, on and on.

I was seventeen when I first heard this song and eighteen when they released the single Christine and their debut album. These records are indelible imprints of my youth. In the way that things worked back then the band were indie sensations, darlings of the NME, Creation Records wonderkids and as a result hawked around the major labels by Alan McGee. They signed to Fontana for a typically large advance. The group's drug use was spiralling at the time and the first thing Fontana did was release a single without the band's consent (Never, a record I adore but which the general feeling was fell short of the songs that propelled them in the first place). Terry Bickers, guitar whizzkid, was increasingly uncomfortable with all aspects of chasing fame and fortune and life on a major label and his relationship with Chadwick broke down. Bickers' drug use and mental health deteriorated jus as they worked on an expensively recorded album for Fontana and a mammoth sixty date tour was about to start. I saw them play at Widnes Queen's Hall on 27th November 1989 and the tensions were evident from the floor of the venue. The following week Terry was kicked out of the tour bus at a service station near Bristol. A week later The House Of Love played Portsmouth Polytechnic with hastily recruited Simon Walker on guitar. This re- recorded version of Shine On was included on their Fontana album and released as a single in March 1990. The single hit the dizzying heights of number twenty and they made their only Top Of The Pops appearance, Bickers out of the group and on his way to forming Levitation. In a lot of ways this was the end for them, even though they crawled on for a few more years, increasingly desperate attempts at flogging singles in multiple formats and albums to recoup the advance Fontana threw at them. They never recaptured what briefly made them special in 1987- 8. Despite Guy Chadwick's ambition, some bands just aren't built to be big.

Penblwydd Hapus Eliza.
Both yours are 18 or over, both mine are 21 or over! Who feels old???
When House Of Love re-released Shine On on Fontana in 1990, Chadwick still sang "I'm so young / Just eighteen". The follow-up single was Beatles And The Stones which contained the couplet "Look at me / Proud of being / Proud of being seventeen". I was a tad disappointed when The Girl With The Loneliest Eyes didn't contain any references to being 16...

Thanks all, she's been spoilt and is now off to town with her friends.

A couple of weeks ago, I squinted down the aisle at work and saw a guy wearing a butterfly logo t-shirt walking towards me. 'House of Love' I said '...great band'. He was pretty gobsmacked that anyone would recognise it these days, let alone someone stacking shelves in a supermarket. I always like to compliment a cool t-shirt though. In the past month alone I've also tipped my hat to Clash and Gene Clark shirts.

I nodded at a bloke in a NEU! t- shirt recently and said something similar. He looked at me like I was a nutter.

Happy birthday Eliza!
Creation wasn't necessarily the best label for them but Fontana seemed to ruin that band. In 1986 to 1989 they slayed smaller London venues and in August 89 Reading Festival was treated to a truly brilliant sonic display from Terry Bickers. Then in the December I saw them at Portsmouth Poly, their first gig without him. It was all downhill from there. Songs that had sounded fantastic live were ruined by anaemic studio production, the ruination of many a promising eighties band. Shame.

Hope you enjoyed your birthday night on the town, Eliza.

The band’s short time at Creation was pop perfection.

Happy Belated Birthday to Eliza, hope she had a good day.

Happy belated birthday to Eliza from me too.

Belated happy birthday to Eliza. Glad to read that a week-long celebration is underway!

I wasn't a fan of The House Of Love, but my girlfriend in the late 1990s really, really was, so I belatedly heard their albums a lot. We went to see Guy Chadwick in 1997, touring his solo album, at the 140-capacity Louisiana in Bristol. It was a good, intimate gig, but your closing sentence really resonated.

Thanks' again everyone- celebrations are ongoing and carry on to the weekend apparently.