The Most Beautiful Girl In Hackney 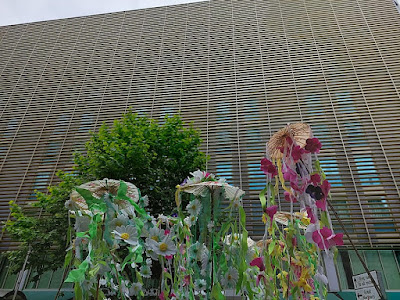 Another Top Boy related post following yesterday's Fuck Buttons double bill. At the end of episode three, series one, Sully says to his young daughter, 'You're the most beautiful girl in Hackney y'know', a line I instantly recognised (Sully is played by rapper and grime artist Kano). It took me a moment to pinpoint where I'd heard it before...

Girl is the final song on Jamie Xx's solo album In Colour from 2015, a dizzying swirl of synths and beats and a voice, chopped up and distorted singing 'I want your love'. The album, seven years old now, is a peach, a thoroughly modern mish mash of samples, voices and songs, spanning the range from bedsit broken heart laptop ballads (like Loud Places) to massive club tunes (such as Gosh). As well as the line of dialogue from Top Boy Girl samples Brian Wilson and Freeze's I.O.U.

Loud Places, with vocals from his Xx bandmate Romy, was remixed by John Talabot twice. This one is the pick of the pair, a stunning ten minute remix that builds gradually but incessantly, synths and voices climbing euphorically, drums padding softly and then a part of Romy's vocal- 'Didn't I take you to/ Higher places, you can't reach without me?' The second half, after six minutes, takes off elsewhere with the bassline leading and Romy's vocal shifting to breathy mutterings about ecstasy and, in a kiss off moment, not being around when he/ she/ they come down.