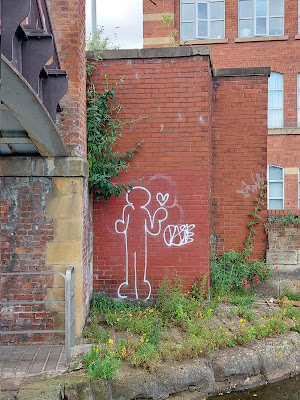 We've been watching Top Boy recently, all four series, back to back. Set in a fictional north London housing estate in Hackney called Summerhouse and detailing the lives of its residents, Top Boy is centred mainly around two young men, Dushane and Sully, who make a living selling drugs. The first two series were on Channel 4 in 2011 and 2013. After that it was dropped and then picked up by rapper Drake and Netflix and two further series were made, one in 2019 and the fourth this year (with one more underway now). One of the episodes at the end of series one saw the tension rising, violence between drug gangs increasing and lives being ended or ruined, quickly and brutally, and the unmistakeable twinkling sounds of this track began to play, looped a little, fading in and out as the drama unfolded.

Fuck Buttons released Sweet Love For Planet Earth on their Street Horsing album back in 2008, a monstrous piece of post rave/ post rock melodic noise, the sound of continents colliding and planets crashing into each other. It's a monumental piece of music, building to a chaotic conclusion. The same year they put out a 12" single of Colours Move with an Andrew Weatherall remix of Sweet Love... on the B-side.

Weatherall keeps the strange and beautiful melodies and the sheets of noise while welding a huge rhythm underneath, a crunching kick drum and throbbing bassline and lets everything go on and on, in ever whirling circles, building the tension before a heart stopping pause and re- entry at four minutes forty. It's the far end of the arc of a curve he stated back in 1991 with his remix of Soon for My Bloody Valentine, noise refitted for weirded out dancefloors. Exhilarating stuff.

I recently watched all four back to back too having avoided it thinking it wasn’t for me. Have to say I really enjoyed it 😍 as for fuck buttons and Andrew’s mix of this track too - blew me away back then and still blow me away now 😎

Similar Barry, I wasn't sure it was for me but have been really impressed with it, top quality drama. Weatherall's remix of SLFPE is as good as anything he did in his last 10 years. The original is amazing too.

Ye Gods, both the original and the remix really are are monumental slabs of sound aren't they? Yes I'm aware that you already used the word monumental in your piece. I tried to come up with something original, but monumental is what they are. Terrific stuff.

Monumental is the word. Or maybe monu- fucking- mental

Top Boy's been on my "to see" list for a while but you've prompted me to get to it.

I was only familiar with the Weatherall remix of Sweet Love... the original is pretty amazing but Lord Sabre just about tops it. To avoid (over)using the word monumental, I'll instead refer to the musical colossus Nigel Tufnell, Weatherall's remix gives the song "that extra push over the cliff". Wonderful.

Fuck Buttons are so good. They're one of those groups that just absolutely nails a sound that captures and manifests something in the air that you knew but didn't know you knew until you heard the record. That is the real function of art.