Forty Minutes Of Fearless And Vegas 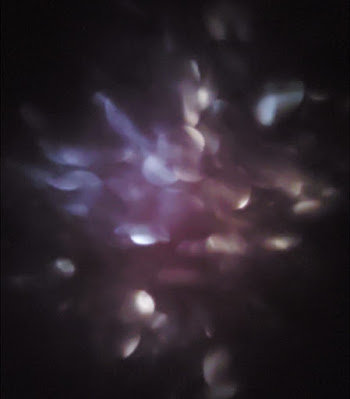 I took this photo the other day by accident with my phone in my pocket. There were several and a couple of short videos too but this was the pick of the bunch- someone said, 'it's like you have a portal to another dimension in your pocket'. If only I'd known it was there all along. It looks very much like a record sleeve too, maybe one by The Cocteau Twins, definitely something on 4AD. Anyway, I like it but despite my best efforts haven't been able to recreate it. For now, the portal remains closed.

How about some dystopian disco for your Sunday? Earlier this week Jesse questioned whether the new Ron Trent album is actually any good and rather than being the Balearic masterpiece it is being lauded as (not least here), it is actually more akin to the incidental music from 80s US cop shows, Miami Vice when it went soft or Magnum P.I. perhaps. I think with Balearic and ambient music there's always a danger of slipping over the line into bland New Age cocktail bar music but I guess everyone's line is in a different place. I've got a couple of Balearic compilations with songs and tracks where I can feel my younger self shaking his head and wondering what has happened.

There's no danger of the music in today's mix being labelled soft focus, pastel anti- jazz. In recent years Richard Fearless, both solo and in his Death In Vegas guise, has made some very anxiety inducing, tense and dystopic ambient/ industrial/ minimal techno. Sheets of metal, cavernous reverb, subterranean synths, icily detached vocals from Sasha Grey, thick urban fog, night terrors, dancing in a damp deserted warehouse somewhere in East London with one lightbulb flickering on and off... it's all here. Plus Chris and Cosey, formerly of Throbbing Gristle, on remix duties and Richard's beautifully mournful piano house remix of Django Django. It's all very intense but also perfectly executed and very cathartic.

Forty Minutes Of Richard Fearless And Death In Vegas

The opening pair of tracks are from the recent Deep Rave Memory and Future Rave Memory albums. Consequences Of Love and You Disco I Freak were on 2016's Transmission album. Honey and Gamma Ray were standalone singles from 2018 and 2014 respectively. The Django Django remix dates from 2016 but was only released properly in 2020.
Posted by Swiss Adam at 08:00

Another great work showing how great RF can be. Thanks for sharing.

I am mesmerised by that photo. Yes, there's definitely something otherwordly about it - and who'd have ever thought the inside of a pocket could be so fascinating?!

Pleased to have inspired the backlash! You know, I always thought Richard Fearless was a chancer ... (just kidding!)

Have always had a soft spot for Fearless, but his output over the last few years has been stellar to say the least. I still rank the b-side to Honey (Witchdance Dub) to be one of my favourite pieces of music full stop

Also, who knew the secrets of the universe were held in your pocket Adam? Which is nice

Another stellar insight into the workings of a musical genius...and that was just the photo inside your pocket!!

As for the mix, forty minutes that I'm happy to keep repeating. And all from the last six years too. Great stuff.