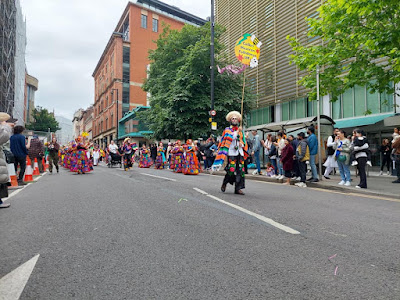 The Tour de France rode out on Friday, kicking off the 2022 edition in Copenhagen (the furthest north le Tour has ever been). It started with a time trial and the Bahrain Victorious team being raided by the police. Today is a day off for the riders as the teams transfer from Denmark to France for the racing to pick up again tomorrow as they head towards the Alps. To celebrate the Tour coming to Denmark, Copenhagen label Music For Dreams released a four track EP of covers by their artists of some of Kraftwerk's Tour de France songs. Charlotte and Reinhard, both of Rheinzand, covered the eight minute long Vitamin in a pleasingly non- Kraftwerk style, Reinhard's violin taking the place of the keyboard melodies.

The EP also has covers of the title track by Danish duo Subneisa (where Kraftwerk's synth melody is replaced, brilliantly, by a trumpet)- not a long song but it will brighten up your Monday. You can buy the EP here.

Back in 2003 Kraftwerk updated their 1983 single and expanded it out into a full album, timed to come out on the hundredth anniversary of the first Tour de France. Fittingly, for a bunch of perfectionists, the album didn't appear until August so missed the race itself. It was their first album since Electric Cafe seventeen years earlier and while it's a very good album, it also shows just how Kraftwerk have been treading water and repeating themselves since the mid- 80s. But then, if you've already invented electronic pop (and had a big hand in the foundation of hip hop and techno too) it's fair enough really.