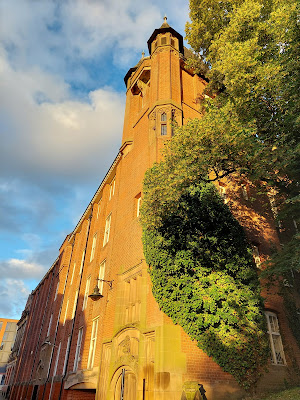 Two songs linked by similar titles and a home town for Tuesday. In 1982 Simple Minds released New Gold Dream (81- 82- 83- 84), an album where they stepped into the big time, their Mittel Europa and Bowie influences becoming something bigger and bolder. Jim Kerr has said that the album was where they discovered a maturity and a depth. It was where they connected with a bigger audience. I've written before about how getting into early 80s Simple Minds has been one of the biggest musical turnarounds and over the last couple of years they've become one of my favourite bands, certainly all the albums and singles up to and including New Gold Dream. They managed too find a balance and interplay between keyboards and guitars, neither being the lead instrument and which gives them a distinct sound. The third single from New Gold Dream was Someone Somewhere In Summertime, a dreamy slow burning, yearning song.

Someone Somewhere In Summertime (Extended)

Also from Glasgow The Poems released an album called Young America in 2008 which has recently been re- issued on vinyl. The Poems are straight out of the classic Scottish indie tradition, breezy, low key songs played on guitar and drums, female singer, tons of hooks, a bit of Country and Western in there, some 60s soul too (The Bluebells Robert Hodgens is a key member of The Poems so none of that should be a surprise). This song- with a title not a million miles from the one above- opens the album, piano and shakers to the fore and some guest start harmonies from Glaswegian indie royalty (Norman Blake and Justin Currie).

Sometime Somewhere Someone Should Say Something

Someone,Somewhere In Summertime is my favourite Simple Minds track. As you say Adam, it's electronic while being guitar music, but no real dominating influence. Still rate New Gold Dream as a cracking album