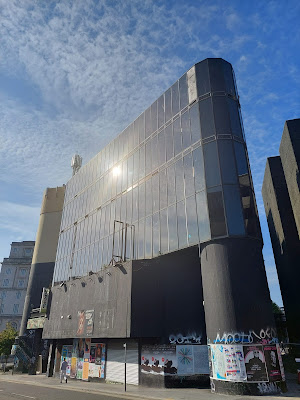 This is one of those 'just because' posts, no real reason for posting it other than it's a great song by a band who seem destined to remain a cult concern but who had the songs if not the temperament to be massive. The Go- Betweens, formed by Robert Forster and Grant McLennan in Brisbane in 1977, made six albums between 1981 and 1988, all of which are worthy of your time and money. They reformed and made three more in the early 2000s but were brought to a halt by the premature and tragic death of Grant McLennan in 2006. During the 80s they moved to London and signed to various labels (Rough Trade, Sire and Beggars Banquet), expanded their line up and sound and in 1986 recorded what drummer Lindy Morrison says is their best, Liberty Belle And The Black Diamond Express. Every song on it could be a single- jangly guitars, clear production, melodies and poetic, personal lyrics by Grant and Robert. This song, Head Full of Steam, was a single, remixed slightly for radio ,with friend Tracey Thorn on backing vocals and a new middle eight. Lyrically, like many of their songs, it's about lost or unrequited love, 'I don't mind/ To chase her/ A fool's dream/ I'm 104 degrees/ With a head full of stream'.

Was it a hit? No, it wasn't. Sometimes it just doesn't happen. It's not that they didn't have the songs but maybe they were just too something to reach a bigger audience- quirky isn't the right word nor is awkward but something stopped them crossing over. Maybe the mid 80s only had room for a certain number of literate alternative/ indie guitar bands and The Go- Betweens fell outside the number who made the cut. Whatever, the songs and the albums remain. Here they are on Whistle Test in '86 promoting it in an empty BBC studio, showing exactly what a great band they were.

What a great performance. Lindy's drumming is superb.

It must be Go-Betweens Friday.

Superb post. I haven't featured The Go-Betweens (or Robert Forster & Grant McLennan, for that matter) nearly enough over at mine. Typically, I got into them just after they split and then didn't get to see them live in concert when The Go-Betweens reformed. The line-up with Lindy and Amanda was rather special though, the band was always more than a couple of great songwriters.