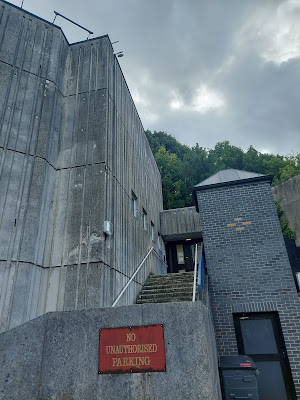 Perry Granville continues to roll through 2022 at a rate of knots. Back in July he released Lumux and before that the still heavily played round here splendour of Dexter In Dub (and the joyous Bedford Falls Players remix). I've posted Dexter In Dub before and make no apology for putting it here again, six minutes of sunset seeking Balearica.

At the end of August Perry let Cleveland Sunday loose, a juddering acid house/ techno bleepfest complete with a supercharged Pete Bones mix that sets out for the outer limits. You can listen and buy at Bandcamp. Perry followed this with an end of September release called Grain Underground that wears Perry's formative influence of hip hop on its tracksuit top sleeve, a breakbeat led track with squiggly acid lines and cymbal splashes and melange of voices. Richard Sen provides a rib rattling remix, bassline and rimshots, and then after several minutes some gorgeous rippling synth lines while keeping the funk flowing.

Back in 2020 Perry released Sailing Ships, a long, transportative, dancefloor oriented track with samples from U.S. TV news about the origins of house music, a screwed acidic bassline, some massive synth riffs, chopped up stuttering backing vocals and a thumping big drum track.

The remix EP is about to make its appearance on vinyl, with some heavyweight names on remix duties- Hardway Bros meets Monkton Uptown (Sean Johnston and Duncan Gray) and Justin Robertson's Deadstock 33s. You can order it here if the sound of that floats your boat/ sails your ship.

I really do like that Dexter In Dub tune.

A superb selection of tracks there, Adam. It's prompted me to give Higher Love Vol.1 another spin (although it's rarely been far away in the past year) and reminded me ahead of Bandcamp Friday that I need to add these Perry Granville releases to my shopping list. Thanks!