Hey Joe, We Ought To Try And Turn The World Around 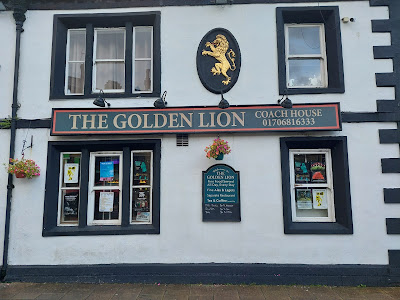 Sometimes, rarely but sometimes, everything comes together, the stars align and the streams cross and you find yourself at the centre of something magical. The offer of a DJ support slot months ago for the five of us that admin The Flightpath Estate, a Facebook group set up to share the music of Andrew Weatherall, at The Golden Lion in Todmorden with David Holmes headlining was something that seemed unreal. As the months and weeks ticked by it became increasingly more real and then suddenly it became imminent, a matter of having to pull together some music, burn some CDs and think about how it might actually work.

The Golden Lion is a traditional pub in an old mill town, tucked in the hills on the Lancashire/ West Yorkshire border. Run by Richard Walker and his partner Gig it has a history of nights with DJs and bands plus excellent Thai food, a one off place that is now stitched into legend, Andrew Weatherall and Sean Johnston's ALFOS nights here especially so. An older gentleman (a retired teacher) standing at the DJ booth in the early evening told me, 'this place is a portal. Outside is Todmorden, in here it's another world'.

A quick guided tour of the equipment, the relief that CDs burned at home worked on the CDJs and then we got into the fun of starting to play to an almost empty pub at 2.30pm. Some familiar faces arrived- hello Claire and Si- and the afternoon drifted into evening, the five of us taking turns to play. Baz played his set including songs from The Pogues, The Animals, Chain And The Gang. Martin played rockabilly and folk. I played half an hour of dub (see Sunday's post) and then some Weatherall inspired songs plucked from his NTS radio shows and mixes, some Durutti Column, Coyote's Weatherall tribute The Outsider, Section 25, Joe Gideon And The Shark's Civilisation and this sublime, ghostly cover of Fun Boy Three/ The Go Go's Our Lips Are Sealed

Our Lips Are Sealed 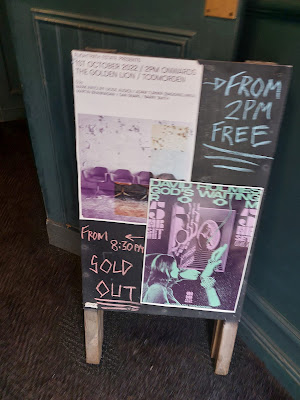 Dan took over for some properly mixed leftfield dance music as the afternoon became early evening and then Mark 'Rude Audio' Ratcliff played, dubby dance filling the pub. At around eight, and who knows where the time went, we stated swapping on and off and then David Holmes arrived. I always assumed that Mark would be the one to do the immediately pre- Holmes part, building the warm up and then handing over. For reasons I still can't unpick, I ended up behind the decks just before David made his way to the DJ booth and began to sort his stuff out, the pub now full with expectant revellers. Mark had played Sabres Of Paradise Lik Wid Not Wit and then I put something else on and then as David continued to get set up, I played L.U.P.O.'s Heaven Or Hell, classic 1990 Balearic house, and then went into Song For Denise by Piano Fantasia, assuming he'd be then wanting to get playing straight away. 'Great track', David said to me, 'Stick another one'.

No pressure there then. So I played Hardway Bros' Argonaut, a Come Together referencing feel good Balearic chugger inspired by a boat trip in Croatia Weatherall and Johnston played. And with that, a brief chat with Mr Holmes, and then I'm standing next to him as he starts to play. Which is not what I expected to happen when I set out earlier that day. 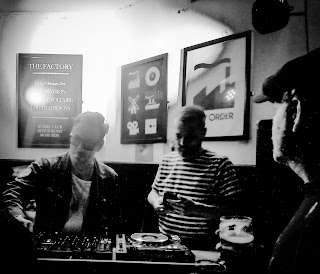 Holmes' set was astonishing, a roof raising four hour set with non- stop dancing from an ecstatic crowd, with some choice remixes of his own music, some Afro- beat, some acid disco, some funked up French stuff and then somewhere in the middle (I lost track of time a bit it has to be said), a song to get a middle aged, leftfield crowd punching the air and singing along...
Sinful
It was quite a moment. Much later and much fun having been had dancing, David finished with his recent remix of Orbital's Belfast, twelve minutes of sweet 1990 euphoria written after the Hartnoll's played at Holmes' Sugar Sweet club in Belfast, at a time when a lot of artists swerved Northern Ireland.
We left the pub at some point, making our way through the town and up the hill to the place we were staying, one of those nights that seemed to go on forever but was over so quickly, amazed and honoured not just to have been there but to have been part of it. I think we're all still buzzing slightly from the excitement while still unable to believe it actually happened. Serious life goals stuff.
Posted by Swiss Adam at 08:00

Sounds like a fantastic experience. Now you are officially endorsed by David Holmes will you be touring?

Oh, I'm feeling the euphoria from here. It sounds truly wonderful, what a great experience (and post!)

What an experience, wish I had been there. Somewhat life reaffirming for you as well, I would have thought, after all you've been through.

Your excitement is contagious! How splendid

Ernie- given I'm still a little jaded 2 days later I think a tour would finish me. But obviously I'm open to offers.

Jase- totally life affirming and it was a joy to be at an event that was so fun after everything that's happened since last November.

C, Aditya- I wondered if I was a bit too gushy and breathless but that's how it came out.

It was such a great day / evening we loved all of it... The Music you all played poignantly brilliant....
♥️ ⚔ ♥

Sounds completely brilliant and I'm so glad it went well. Handing over to a legend isn't something anyone gets to do that often but it sounds like you weren't just there to make up the numbers!

Great piece Adam, feels as if I was right in the room. Glad it went well