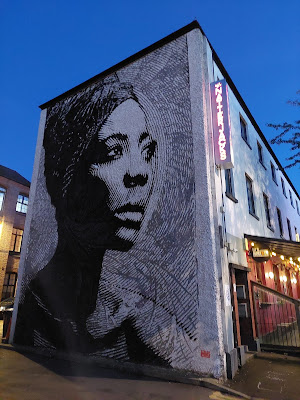 A week of new music continues with some sounds from Leicester, the city that buries its kings under carparks. Echolocation, an ever moving five piece on a quest to stand sideways onto the world and point out everything that makes things seem a little bit worse every day. Leicester suffered during Covid, a city that was locked down longer than anywhere else. Echolocation's new album, Forget Everything (their seventh) began before Covid, was worked on during it and completed since. The single More Than Human drifts in on atmospherics, waves of drones and frontman's Pete's slurred but dulcet tones, 'I feel nothing, I remember everything, I regret nothing, forget everything'. Percussion and noises add to the sense of dislocation and unease, there's a feeling that the song must change gear shortly but never does, eventually fading away into static.

The synths and textures have become more upfront than on previous, more guitar oriented, albums. Opener I Know The Truth starts slowly with synths and bass before bursting into life with drums. Whose Crisis? is funky art rock, synths imitating horns, post- punk guitar lines on top and Pete once again asking questions of the void. Harvey's guitars come back throughout- I'm A Meme and Luddite have shades of Johnny Marr and Peter Buck respectively and Pete's modern life commentary/ existential diary continues to the end with I'm A Meme, I Know The Truth, Duty Of Care and Pretzel Logic, LBC and eventually reaching the sparse, slowed down, post- rock/ post- everything of Nothing. As Dan brushes his way round his kit and a lone guitar/ synth line drone wails, Pete concludes, 'Those cappuccino days are over... can we just forget everything?'
Listen and buy at Bandcamp.
Posted by Swiss Adam at 08:00