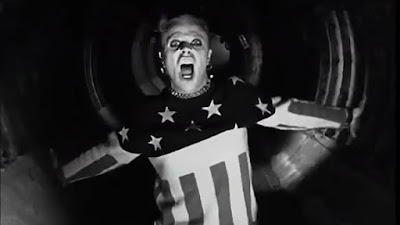 I'm sure everyone who reads this will know by now that The Prodigy's Keith Flint was found dead by police at his home yesterday. Keith was as much the face of the British music boom of the mid 90s as Damon Albarn, Jarvis Cocker or either of the Gallaghers and the music the group made provided a big selling counterpoint to the retro sounds of the guitar groups. The Prodigy came from the Essex rave scene, all long hair, jogging bottoms and very fast bpms and worked their inwards, eventually making some of the singles that defined the times. Firestarter was one. Not that it matters but I always preferred Breathe, a perfect distillation of punk x rave.

It was announced later on yesterday by Liam Howlett that Keith's death was suicide- which is unbelievably sad. People who knew him all said what a sweet and lovely man he was. Someone else commented that suicide is 'a permanent solution to a temporary problem'. Everyone, but men especially, have got to learn to talk to each other more and ask for help when we need it.

In the Britpop era, The Prodigy were one of the few "dance" acts that sad old guitar boy (me) had any time for. Possibly because they were essentially a metal band with beats.

My abiding memory of Keith is when we blagged our way into the VIP area at the V Festival, late 90s, and he was riding around on a golf buggy. I think the battery had gone or something so he got a mate of mine to push/pull him around. He seemed like a very decent bloke.

Nicely done Adam. A mate of mine used to work for a courier company in the Essex area, sometimes delivering parcels to Keith himself and confirms that he was indeed a lovely, approachable, down to Earth fella, the polar opposite of his onstage persona. Tragic.

A lovely tribute and as CC said, wise words indeed. Few problems are permanent so yes, talk, talk, talk it all out. Always someone there to help if you ask for it.