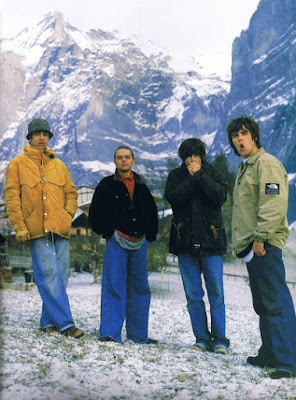 Stop me if you think I'm going too far with all of this but my investigations into the backwards songs The Stone Roses released as B-sides in the late 1980s has taken me further into new territory. Two weeks ago I started with the official releases- Full Fathom Five, Guernica and Simone- which paved the way for the giddy, trippy backwards version of Waterfall that is Don't Stop. Last week I got sucked into a backwards wormhole with the vinyl version of Full Fathom Five which when reversed gave us the Peter Hook version of Elephant Stone. I also found the intro music, the backwards version of She Bangs The Drums that is I Am Without Shoes.

Delving further I was reminded of a Silvertone re-release of the debut album, an anniversary rip off edition, where they stuck some 'new' backwards tracks out as to entice fans in (along with the album on a USB stick that was shaped like a lemon). There were five of these untitled songs, all versions of songs off the album, played backwards. Presumably Silvertone went through the tapes and found the bits Squire and the rest abandoned once recording was finished. This one is Untitled 4, some of the guitars and bass from I Wanna Be Adored, with a lot of extra noise and feedback.

Simone was an extra track on an import 12" single, the U.S. release of Adored- I posted it two weeks ago- but this fan made video for Simone is worth a watch, capturing something of the spirit of the backwards songs and the times (Belinda Butcher from My Bloody Valentine and the Soon video is present too, drifting through the washed out visuals ).

Don't Stop backwards is Waterfall forwards but there's a lot more than just that going on here, with forwards and backwards vocals and John's guitars playing in both directions.

Lastly, for the moment, a Youtube user called Bryan has put together twenty three minutes of Stone Roses backwards songs played forwards (these are backwards versions of digital releases- this is made clear by the first song, the CD single version of Full Fathom Five played backwards, to give us a disjointed version of Elephant Stone, as opposed to the backwards 12" vinyl version which if you recall gave us Hooky's Elephant Stone). This first track makes it clear that the backwards songs were worked on, not merely the tapes reversed, and had parts added and taken away. It is followed by reversed versions of Guernica and Simone (Made Of Stone and Where Angels Play, both floating around in swirly rushes with the song surfacing ever now and then and then fading into the whirlpool). Bryan has then stacked up Untitled songs 1 to 5, the 'new' backwards tracks now played forwards to give us an alternative version of Where Angels Play, two scrambled versions of She Bangs The Drums, the version of Adored posted above and then the return of She Bangs The Drums). Are we done yet?

Great stuff! Thanks for doing this research into that wonderful band, The Seror Enots.

And don't tell me it should be Sesor - like the band themselves, I didn't just turn it backwards I added elements.

I was going to do the blogpost titles backwards. Not sure why I didnt.

On a slight tangent, I once borrowed a tape of Substance that twisted and played backwards from about halfway through and I promise you that Bizarre Love Triangle in reverse is a Tune.

I can imagine that BLT backwards is indeed a tune Tom.

And here's BLT backwards. Just rough and ready digital, not analog sadly. Surprisingly it sounds quite similar to the normal version.

I wonder if anyone's done a study of reversed tunes and the types of changes that happen.

Thanks very much Swanditch for doing that, and yeah what's surprising is how unmistakably Bizarre Love Triangle it is even in reverse. I wonder if there's some musical reason why? Regardless, this is clearly the next hit club night in the Star & Garter: Namchester, all the old Manchester songs you loved but backwards.

A final note on reversed songs: The Darling Buds once released a remix of Shame On You, the Slightlydelic mix, with loads of reversed bits which I liked a lot. Might be worth a look if you could ever bear them.

That version of BLT is interesting. I think maybe synths and keyboards sound less reversed backwards that guitars. Maybe the chord progressions are more stepped to. Interesting.

Am thinking of a follow up backwards post so the Darling Buds song may be of use.