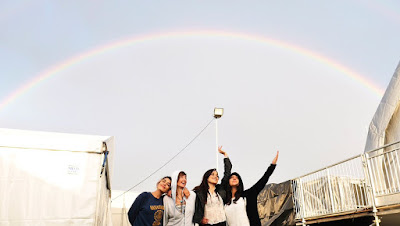 Last month Warpaint played a gig in Los Angeles to celebrate their fifteenth anniversary, news that I was pleased to hear. The interviews that surrounded their 2016 album Heads Up made it look like the group's future was a bit iffy, that tensions in the band plus various members making solo records might lead them to call it a day. In 2015 they'd released a double A-sided single No Way Out/I'll Start Believing, two songs that are among their best, and there was talk about releasing a slew of singles as they recorded them instead of a full album. When they regrouped the four members spent quite a bit of time contributing to sessions individually, which never seems to bode well for a band. The sessions resulted eventually in Heads Up, an album with synths to go with the guitars, faster bpms and a much poppier lead single in New Song. They supported Depeche Mode in the USA during 2017 and then Harry Styles on some dates in Asia in May 2018 but other than that they've been fairly quiet.

I'm pleased they're still together. The three albums they've made since 2010 (plus the 2007 mini album Exquisite Corpse) are Bagging Area favourites. Their sound- post-punk/dub influenced bass, psyche-rock guitars and gently stoned California harmonies- is great, modern dream pop with dancey rhythms. Their best album is 2014's self titled one, a record packed full of good songs and hooks- Biggy, Keep It Healthy, Disco//Very and Love Is To Die. Instead of that though here are two songs form the records that came before and after it, which I've been rediscovering this week.

Undertow was the lead single from 2011's The Fool, a slinky, low slung groove, gliding along the West Coast.

Whiteout opened Heads Up, a slightly busier affair, with a killer bassline and staccato guitars.

Whiteout
Posted by Swiss Adam at 08:00

15 years, were they even in their teens?