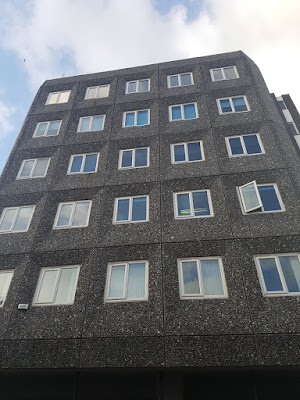 Mogwai's The Sun Smells Too Loud (off their 2008 album Hawk Is Howling) is one of my favourite pieces of music of the 21st century, centred around rolling, pulsing bass and pounding drums and soaring guitars making an ecstatic noise. It is very lysergic with a groove you can dance to. A Youtube user called Simon has put Mogwai's music to clips of the Tommy Seebach Band and their dancers (filmed sometime in the late 60s doing Apache) to good effect.

There- doesn't improve your day?

The Sun Smells Too Loud

The James Holden remix, only available I think as part of his DJ Kicks CD, turns the noises up all over the place, dismantles the original and put its back together in a completely different order to fairly disorienting effect. All sorts of effects and FX going on including the main rippling guitar part played backwards (I think).

An inspired clip and a bonkers remix. Great stuff SA.

This may be of interest...?
https://www.youtube.com/watch?v=zZnXCX1Qx2Y