You're Gonna Make It After All 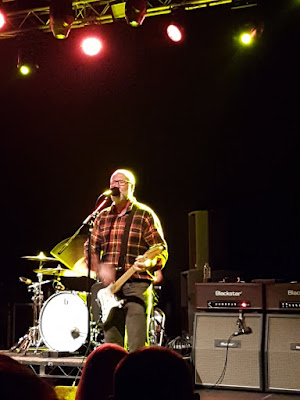 Bob Mould at Manchester Academy 2 on Sunday night, twenty years after I last saw him play there. Back in 1998 he played almost entirely solo stuff, promoting his then new record The Last Dog And Pony Show, with just a Sugar song held back for the encore. This time around, promoting his current new album Sunshine Rock, he plays songs from the last forty years of playing and making records, from their earliest recordings to his latest. Backed by a high kicking bassist and a drummer engaged in a one man war of attrition with his snare drum Bob hits the stage loud and fast and doesn't really let up. His guitar/pedals/twin amp set up makes Bob sound like two or three guitarists and it's loud, really loud, with those crystalline melodies fired off within the sheets of distorted riffs. There are few gaps between the songs, no light show to speak of, no projections or backdrop- just songs from the Bob Mould back catalogue. He opens with 2014 song The War and then blasts straight into Sugar's A Good Idea, the bass riff on its own for a few seconds before being submerged in Bob's wall of guitars. Three songs in and we're into I Apologise off Husker Du's 1985 New Day Rising. There is then a liberal smattering of songs from Sunshine Rock, Bob's self-willed optimistic, happy album, an album written in the aftermath of the death of both parents and Husker drummer Grant Hart, songs like Thirty Dozen Roses and Sin King, and highlights from Sugar's 1992 album Copper Blue (Hoover Dam sounds enormous, bigger than the guitars and keyboards of the album version). People around me are adjusting their earplugs. Husker Du's 1982 hardcore single In A Free Land has been dusted down and in Trump's wake sounds no less relevant and no less alive. Bob has been unwell in recent days and on antibiotics for a chest infection, not that you'd guess- Sugar's If I Can't Change Your Mind roaring out of the amps, noise plus melodies, punk plus chorsues. He pauses three quarters of the way through to thank us for coming and introduce Jason Narducy and Jon Wurster on bass and drums and then its back to business. Something I Learned Today, one of Husker Du's most vital songs, is a ferocious blast, spitting fire and piss and from this point, for the final fifteen minutes or so Bob and band go off setlist, launching into one Husker Du song after another, almost a medley- Chartered Trips, their cover of The Mary Tyler Moore theme Love Is All Around Us, a beautiful and raging Celebrated Summer with Bob stretching out the pause into the guitar picking section at the end, finishing with Makes No Sense At All, the single that paved the way for Pixies and Nirvana to name but two. No encore. Lights on. Ears ringing. Home.

My ears are ringing just reading this Adam.
An excellent review of what sounds like an excellent evening.

I saw Husker Du once, Sugar twice and Bob in various 'solo' incarnations a handful of times, so I reckon he's at least partially to blame for my ever present tinnitus - in fact the screeching in my ears ramped up a notch just reading about this gig! Would loved to have been there though - what a setlist! Great review SA.

Thanks both. Ears still not quite returned to normal.

I bought Sunshine Rock a few weeks ago. He really hasn't missed a beat. To these ears, not far off from File Under Easy Listening. Thanks for taking us to the show.