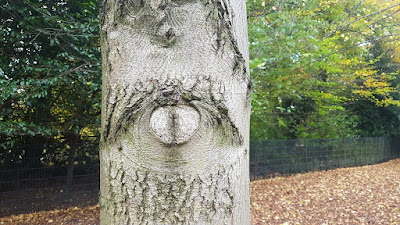 Something to take the edge off November and add some warmth to your week via Denmark and South London. Babylonian Beaches is a track by Michael son Of Michael, a Dane, and is remixed here by Rude Audio, based somewhere in the Crystal Palace area. Very nice gently throbbing, cosmic Scandi- disco. Find it at Soundcloud here.

Michael son Of Michael's album Going Coastal, just out and including the original mix of Babylonian Beaches, is here. Behind the cool, laid back, downtempo, Scandi- ambient electronica is a commentary on 'the improbability of alien lifeforms being technologically inferior to us, dreams of travelling to the Red Planet, the handling of Brexit by the Tories and the Labour Party, life by the beach, the imposter syndrome and the virtues of humans dancing robotically / robots doing their best to dance like humans.'  So plenty there to counter the view that electronic music isn't about anything.

Rude Audio's back catalogue, dubby, Balearic chug with Arabic sounds and influences can be found at Bandcamp and is worth investing in. This track, Repeat Offender is a sweet and shiny way to spend six minutes, repeating descending synth parts and some New Order- esque melodies.

This dub of Rumble On Arab Street by Valtow is also top notch, light and shade with little vocal snatches coming out of mix.

Have heard a couple of Rude Audio bits and bobs, but deffo investigating further. Repeat Offender is fantastic

These are all great. I've not heard of MSOM or Rude Audio before now, will definitely go back for more.