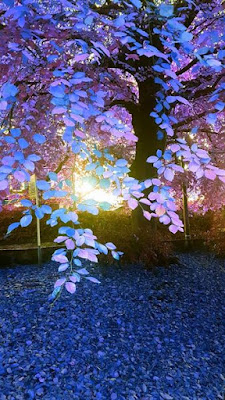 The sheer quantity and at times the torrent of new music this year have been one of the things that have helped to deal with all the shit that has been thrown our way. Regardless of your political persuasion or your thoughts on how the pandemic has been handled, it's been almost unremittingly grim. Music helps. Richard Norris' Music For Healing series in the spring was a guaranteed aural balm, longform pieces of ambient/ deep listening designed to help and bring some form of ease. In September Richard followed these with an album called Elements, five lengthy instrumentals, using analogue synthesisers to make hypnotic and uplifting music.

Now Richard has added a four track EP to his 2020 catalogue, Golden Waves, four chilled, ambient works, all rippling synth lines, pulses and soothing drones. Lead track Golden Waves has some beautiful little melodies dripping over it. Cloud Surfing is lighter than air, padding drum sounds and warmth. Blue Star Gold harks back to the Music For Healing tracks, patterns of single notes and reverb. Signal To Power sets out with long chords and synth sounds, washes of tone and a celestial choir, a distinct lack of hurry to go anywhere, just a lovely, long drift. Buy it at Bandcamp.

Back in the 90s Richard was one half of The Grid along with Dave Ball (formerly of Soft Cell). Their 1993 single Crystal Clear was remixed by The Orb in majestic fashion, Clear Like An Unmuddied Lake, an absolute highpoint of 20th century ambient acid house, a track still revealing its pleasures twenty- seven years after its release (which unfortunately I can't find on mp3 and I'm sure I had it digitally at some point. Probably on an old hard drive).

The Music For Healing tracks were an absolute saviour in the first lockdown - proper deep listening to drift away with and refocus the mind. I'm still regularly listening to them now. This new EP is excellent too. Must have got his creative juices going as he's promised regular EP's going forward - definitely something to look forward to

Yep, he's talking about a subscription service too isn't he, with monthly releases. Sounds like an interesting approach.

Hope all is well at SA Towers. I agree on the quantity and quality of releases in 2020. Music is just about the only thing that had has made this year tolerable. Immersing myself and ignoring the goings on as best as I can.

Things are ok here thanks Brian, Eliza's recovering from the Covid though she was quite unwell for a few days. We all seem to be Covid- free so far. 14 days isolation continues until Sunday.

Fingers crossed that the remaining days of isolation go well.

And again, thanks for the continuing posts and music. Richard Norris' prodigious musical output this year has been a joy and a salve in these strange times.

Completely agree with the comments on the Grid remixes of The Orb too. I only seem to have a very crackly MP3 ripped from my crystal clear vinyl 12", although I have the CD single boxed away somewhere and I'm pretty certain that the mixes are on there too. Crate digging beckons.