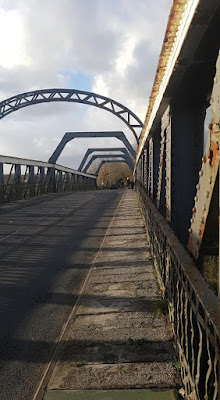 Daniel Avery has released a new song, the one that is B- side to his Lone Swordsman track (first out digitally in September, out on 12" in January). Petrol Blue is a beauty, definitely not just an offcut or makeweight slipped onto the B- side to make up numbers. In the press release to accompany it Daniel describes the view from his studio, a metal shipping container overlooking the Thames-

'The views across the water without a single sight on the horizon always create a certain atmosphere in my mind, some kind of unknowing warmth. Real life seems pretty distant in those moments.'

There's something in those words that he has nailed completely in the music- the slow motion drum intro and tambourine/ shaker, the twinkling synth part and then the bassline. The washes of sound and keyboard melody on the top bring the 'unknowing warmth'. Lovely stuff. I think one of the things I've missed most this year has been the sea. In the summer, just before we went into Tier 3, we had a day out in Liverpool and walked down by the Mersey along Otterspool promenade. Hearing the waves hitting the seawall was much needed. We had two days in south west Scotland and walked on the beach at Southerness, despite the wind and occasional rain.

Just in case you needed a reminder this is Lone Swordsman, Daniel's tribute to to Andrew Weatherall, recorded the morning he heard the news Andrew had died. There are moments where it suggests Smokebelch by Sabres Of Paradise without ever quite going there and stands out as one of the most emotive and beautiful pieces of music released this year. There are still a few vinyl copies available for order if that's your bag.

Loving Avery's work at the minute, Love And Light was a lovely surprise. Echo what you said about Lone Swordsmen, it's that rare tribute that acknowledges the past so keenly, but still plots it's own path, and he really captures the emotion beautifully. Looking forward to giving this new track a spin

I listened while busying myself with something else, twice forgetting what I was actually listening to and said 'this is lovely' to myself both times. I was right.
I'm missing the sea too. A long coastal walk is very appealing right now.

Actually heard Lone Swordsman the other day and I'll admit was slightly miffed that I'd not read about here first. Then I scroll down and see I'd simply missed it. Mea culpa, I should never have doubted etc