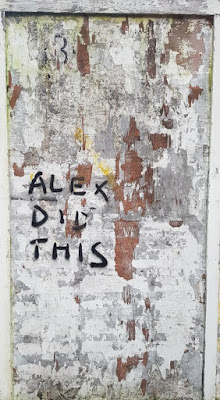 It never rains eh? We had  a positive test for Covid within our household yesterday so are all now isolating for fourteen days- it's made all the more difficult by the fact our eldest is clinically extremely vulnerable so we're having to be extra- isolated within the house as far as possible (with only one bathroom) and extra- careful with the risks of cross infection. It's all it of a nightmare.

As a distraction, here's some music- in 1990 Love Corporation released an acid house infused album called Tones. Love Corporation were Ed Ball's one man band, an side project from his music made as The Times. Tones is a six track record with Palatial as the stand out, a song later remixed by Danny Rampling, but the rest of the album is worth spending some time with too- a lesser known but rather good slice of 1990.

Oh that's awful luck mate, good luck to all of you and I hope the next couple of weeks are as straightforward as you could hope for.
I remember Love Corporation being a real surprise after albums by The Times. With hindsight it really was old sixties influenced paisley wearing Creation morphing into the new acid house influenced baggy clothed Creation, refashioning the label to start the new decade.

I'm coming towards the end of a period of isolation after testing positive. My wife got a negative result and we've tried our best to avoid close contact but it's not easy when under the same roof every minute of the day. I don't envy your situation. Everything crossed for you.

Terrible news my friend. All the best to you and your family and I am sure you all stand these horrible days.

Yet more shit. All the best to you and yours feller, thoughts with you.

Sorry to hear that Adam.
What a horrible situation. Hope everything goes ok. Thinking of you all

OH jesus, what a nightmare, all the best with that

Not sure I've ever heard anything by Love Corporation other than Palatial. Might be time to put that right, only 30 years late to the party

Sad news, but I'm positive everything will turn out alright. All the best wishes for the Turners, and jah love!

Look after yourselves - sending love and positivity.

All the best to you and yours - be well.

Ah bollocks man... Was it Alex ? Alex did it.
Play some Weatherall on that new turntable of yours and it will scare it away.

Sorry to hear about your isolation situation. I hope you all get through ok.
-SRC

Thanks everyone, isolation day 2 drawing to an end. All bearing up.

Oh no - so sorry to read that, wishing you and family all the best with getting through things safely and as smoothly as possible.

Take good care Adam, all my best to you and your family! Take care of your mental health with the same care you show your bodies. Meanwhile I am just throwing soft items at my TV watching this election drag on...

The original Palatial is a BIG TUNE. The Rampling Mixes are all the more enjoyable. I remember being at a Club night in South London in 2000 with a bunch of friends and Danny was DJ's as it was the owners birthday and he put on Palatial and the crowd, which was all over 35 by my estimation, went mental.

I recently picked up a 7" of Red With Purple Flashes b/w Biff Bang Pow by the Times. Can't seem to keep it off the turntable.

I seem to be avoiding the elephant in the room. Adam, this is going to be a trying time. As you can see, you are surrounded by many who care about you. We'll be sending those good vibes... especially for your son who we feel like is part of our little group lo these many years. All the best.

Take care and look after yourselves.

Best wishes to you and your family, Adam, sending positive vibes your way.

Thanks for the Love Corporation post, too, always welcome.

All the very best