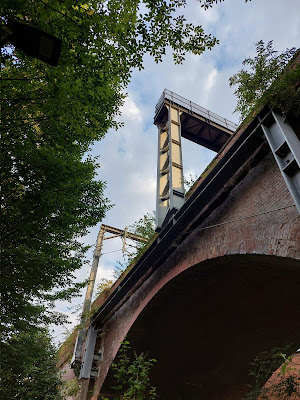 By the turn of the millennium The Fall were becoming a less well loved affair. Mark's reign seemed to have flipped into something less lovable, line ups disintegrating, being fired or walking out, tales of drunkenness, violence and arrests (on stage and off stage) becoming wearying and worrying. There were of course still disciples who would buy every album and go to every tour but by the time their 2000 album The Unutterable hit the shelves, some had silently drifted away. But even a below par Fall album contains moments of Smith genius and on The Unutterable one song stands as a 21st century Fall highlight.

The band are in their finest North Manchester garage band form, guitar lines ringing and drums clattering and when they smash into the chorus the sheer force of the distorted guitars is a shot of pure adrenaline. The bass sounds brilliantly filthy, as if it's been dredged up from the bottom of the ship canal, covered in all manner of shite and detritus, shaken down and forced through an overdriven amplifier.

There are websites that try to pinpoint and explain all Mark E Smith's lyrical references, a small band of users making contributions and identifying the obscure, the possible and the probable. There are similar websites for Half Man Half Biscuit and I can't be the first to see parallels between these two long running north west cultural commentators. Two Librans is littered with classic Smith lines and references, from the titular zodiac pair to Oprah Winfrey and her study of bees, Nelson in Timor, Tolstoy in Chechnya and the miracles of blonde September.

Like the lyrics of Steely Dan, I'd rather not know the references - ignorance is bliss and all that. MES was once interviewed by one of the music glossies Q or Mojo, one of those, and he tried to explain where he got his inspiration from. He was in a pub at the time and very *relaxed*. He made no sense whatsoever!

Is that one of the Castlefield arches btw?