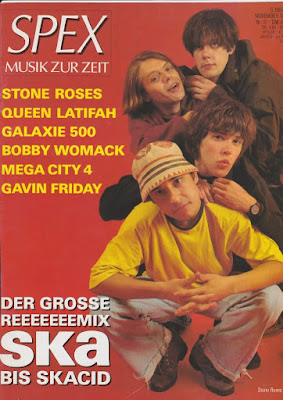 Back in 1988/89 The Stone Roses were a blast of fringes, flares and winter coats coupled with psychedelic, insurrectionist guitar pop and abstract expressionism. They also had a tendency to take the tapes they'd recorded their songs onto and play them backwards. These backwards experiments created four songs, all four of which are headspinning adventures in sound. I remember reading an interview with the band where Ian and John spoke about for fun they used to drive out to the airport, park up near the runway and lie on the bonnet of the car while jumbo jets took off overhead (hallucinogens may have been involved). I seem to recall them saying that the backwards songs were partly an attempt to get that kind of sound on disc.

The first released fruit of these studio experiments was the Elephant Stone 12" single, out in 1988 (Elephant Stone sounds more and more to these ears like one of the shiniest gems in their back catalogue, especially the 12" mix). Full Fathom Five (named after a Jackson Pollock painting) is Elephant Stone backwards, vocals and music, Squire's guitar lines recognisable, the trippy shoom-shoom sound of backwards cymbals a constant with Ian's menacing backwards vocals.

Released the following year (round about now in 1989) the Made Of Stone 12" had two B-sides, the acoustic ode to oral sex that is Going Down and Guernica. Guernica is the music from Made Of Stone backwards (minus the drums) but with new vocals, sung forwards, smothered in reverb to sink them into the track. 'You wanna hurt me stop the row' Ian sings, and 'we're whores, sit down, we're whores, that's us' (and the line at the top of this post). The driving guitars and bass of Made Of Stone sound immense backwards and it sounds like there may be some extra guitars or feedback added by Squire to double up that ghostly, rushing sound. It's not unlike hearing them in a wind tunnel (or underneath the engines of a jet plane taking off). Guernica was produced by The Garage Flowers, an alias they used when producing themselves, and it's no surprise they took the backwards experimentation further. Like Full Fathom Five, Guernica is named after a key 20th century painting.

The third backwards B-side was Simone, only available in 1989 on a U.S. import 12" (I Wanna Be Adored). It was this point, standing in HMV in '89 that I realised I was in deep, about to cough up £8.49 for a 12" single with only one song on it I didn't already own. Simone is Where Angels Play reversed, a backwards version of a song that wouldn't be put out by the group until Silvertone released as a B-side in 1991 in an attempt to milk the cow while it tried to sue them. Simone is a trip, shimmering and moody with guitar lines coming out of the inky blackness, no drums, the faintest, echo-laden whispers of vocals and then throbbing rushes of rhythm guitar. A swirling psychedelic stew. Play all three backwards songs back-to-back for full on backwards fun.

The ultimate backwards song was Don't Stop, a song that graced the debut album, Waterfall backwards with cowbell, new drums and words, perfectly pitched (and perfectly placed, following on from it's forwards version). I wrote about it last year, to coincide with the 50th anniversary of the events of May 1968. It's here. I said then that to write the lyrics for Don't Stop John listened to Waterfall backwards through headphones and wrote down what Ian's backwards vocals seemed to suggest, creating with one of the best set of lyrics on any Stone Roses song. You better stick Don't Stop on after the first three for full effect. 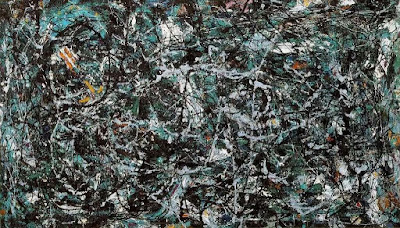 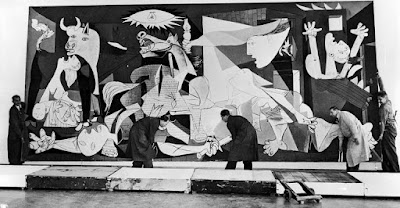 Isn't there another that they used as intro music called something like Walking Without Shoes?

Yes, I've written about that before. Loop of a drum break from a hip hop record and some screeching.

Ah, no I Am Without Shoes is different- or was mixed into the intro tape.

Dismasters 'Small Time Hustler' was the source of the drum break.

Further research is throwing up some extra info. There are 2 versions of Full Fathom Five, the 12" version (the original version) and the cd single version (which I posted, has extra guitar effects). A follow up post may be required.

What is the track I posted the link to, Adam? It says I Am Without Shoes reversed. Was it a backwards version of She Bangs The Drums with new backwards vocals?

It's I Am Without Shoes (She bangs the drums backwards) for 1.30 then reversed for 1.30. New vocals too I think. The first half is the same as another another YouTube post of IAWS that is 1.30 long.