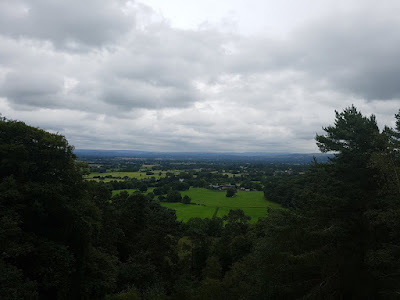 Glok's Dissident album was one of my favourites of last year. It has just been joined by a companion album, eleven remixes of songs from the original. One of them, the Leaf edit, came out last year but the rest are all new and of a very high standard. It occurred to me when the vinyl arrived that this will be one of the last times a new track is released bearing the words Andrew Weatherall Remix in brackets after it. Andrew's remix of Cloud Cover is a slowed down, chilly, electronic groove, ghostly synths and deep bass and a rattling snare drum, the sound of high rises and underpasses.

There's plenty else to get into across the double vinyl/ eleven digital songs. Andy Bell's own fifteen minute remix of Pulsing is a joy, quarter of an hour of ambient/ shoegaze crossover. The Minotaur Shock Remix of Weaver and C.A.R. remix of the same song take the same source material and end up in very different places with it. Timothy Clerkin's new version of Projected Sounds is a stunner, an intense acid crawl with trippy backing vocals and buzzsaw synths.

Richard Sen's eight minute remix of the title track opens the album, a dark, heavy groove with guitars and spaced out sounds bouncing around, the wah wah riff dropping in and out, skyscraping solo notes and a juddering bass riff, a remix designed for soundsystems in the woods long after dark.

One of the best albums last year for me too. The remixes are on heavy Rotation at my place - fantastic stuff

Always nice to see people confounding expectations. He's on a bit of a roll isn't he?

What a fantastic collection of remixes. This certainly is a required companion to the parent album. The Weatherall Remix of Cloud Cover is stunning. You are on point SA, this remix is Urban Ambience at it's best!

Just got this (the remixes) solely on your recommendation, Swiss A. I was heavily swayed by your perceptive and sad note that very soon (now/already?) we will never see a new track remixed or otherwise from the late and lovely Mr Weatherall.
It is a superb package: great music, cool gatefold sleeve (I do love a gatefold) with interesting liner notes, luminous blue/pink/purple splatter vinyl, well mastered and pressed.
Nice one - thanks X

That's what blogging is all about Max- sharing the joy. It is a superb package and the liner notes are a treat as you say.