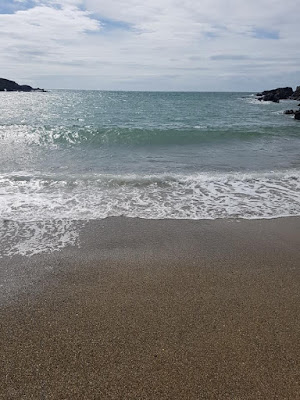 When you disappear to a place like Anglesey for a couple of days it's easy to believe the issues that have swallowed us up this year are not so very important. There aren't many people around- the surfers at Rhosneigr were taking advantage of the wind and the waves and the fish and chip shop had a one way system, people were wearing face masks as they came out of or went into shops, but if you just ambled about the island, visited the fairly quiet beaches and bays and stopped off to look in on some of Anglesey's Neolithic sites, the stresses of recent months vanished a little. The 2020 fear of being caught without hand sanitiser never entirely goes away though. We were trapped in the rain in a bus stop eating fish and chips because we're still not taking Isaac into indoor cafes or restaurants and when we stopped off in Conwy on the way home it was disturbingly busy (at least to us with someone who we are effectively still shielding, it was). Everything's got so complicated and difficult this year. Sitting in a caravan in a field is a good way to simplify things even if it's only for a short while.

This song from 1991 is never far away from me- World Unite by World Unite. It came out on Creation Records when Alan McGee discovered acid house/ rave was the new rock 'n' roll and put out a load of dance records (later brought together on the era defining Keeping The Faith compilation). World Unite is seven an a half minutes of good vibes, trippy dub house, a bubbling synth part and bassline, a breakbeat, some organ, and a spoken/ sung verse immediately followed by a sampled global/ world music female voice.

World Unite produced nothing else as far as I can see, just one 12" single with this version on one side and the Unitemix on the other. The names credited with writing the song are Stacey/ Potter, it was recorded at Vons Studio in Islington and engineered by Simon Daniels. Someone recently suggested to me that World Unite were probably a bedroom producer and a drug dealer mate of McGee's who found themselves together for a few hours with a sampler and some ideas. The press release that came with my white label copy says 'World Unite are Martin Stacey and Graeme Potter, both of whom hail from Essex- although Martin now lives in Wapping and Graeme in Bath. This is their first record together. Martin (male vocal) encourages us to 'Listen to the voice of the world unite/ Believe in love, believe in life/ Live and let live/ Live and let love', over heavy rhythmic drums and ethnic female chanting, from Madagascar. Real hot!'

In a way I don't need to know who Stacey and Potter were/ are. The idea of making one perfect but largely unknown single, releasing it and then disappearing, is very appealing to me, especially one bringing joy to a small number of fans nearly three decades later.
Posted by Swiss Adam at 08:00

Spent a week in Anglesey earlier in August,
Sun,Storm,Sun but loved every minute.
The sunsets were magnificent and only just over an hour from Manchester.
If you like Neolithic sights its perfect

Anglesey sounds perfect, so glad you got away there and had a relative (definitely relative, as everything seems to be now!) degree of freedom. I like the tune too.

This was - and remains - one of the highlights of Keeping The Faith. I previously worked in and around Bath and knew a guy called Graeme Potter, never realised he might be the one from World Unite. That said, my wife works with someone called Glen Campbell and he's clearly never sung Wichita Lineman in his life, though I'm sure he's tired of people asking if he has...

I'm glad you got a brief respite from the mad world we're currently living in. Beautiful views of Angelsey in this and Wednesday's post.