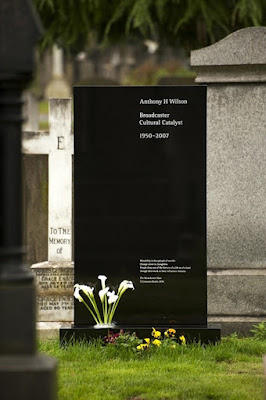 It was designed by Peter Saville and Ben Kelly (of course) and stands out among the ones around it, all in black, in the same way Wilson did when he was alive. In the film 24 Hour Party People Wilson, played by Steve Coogan, says he suffers from 'an excess of civic pride' and there's no doubt Tony was utterly committed to improving Manchester and Salford, to changing things- a record label founded on revolutionary lines with equally revolutionary design principles, a nightclub, a long line of bands and artists who made art first and commerce second. All these things changed the city partly because he saw no reason to 'fuck off down to London', but to do it here, and partly because (eventually) the nightclub brought people to the city (as revellers, as students, as workers), who stayed and helped the city grow. The nightclub inspired the building of bars and flats and the regeneration of warehouses, new places for people, that have a look, a design aesthetic, a knowing modernism. And so on. Not all these things are solely due to Tony Wilson but they are at least partly due to him.

There's been a tendency since he died to lionise him. While he was alive, especially in the 80s and early 90s, he was sometimes a divisive figure. That twat off the telly. Smug. Too clever for his own good. By all accounts he was capable of falling out with people, his friends, easily and without warning. Tony I'm sure would be amused by the ascension to sainthood he has achieved after death and I think he'd love it as well. 'When you have to choose between the truth and the legend, print the legend', he is supposed to have said. This quote comes from 24 Hour Party People as well. The legend becomes the truth. So it goes.

In 2015 this stunning record was released, Mike Garry's poem about Tony, a figure he knew from growing up, from seeing him on the TV and from his works, set to music by Joe Duddell, based on New Order's Your Silent Face, and then remixed by Andrew Weatherall. It remains one of the best records of the last decade, a nine minute tribute, moving and uplifting and elegiac.

That's terrific. Mike Garry's poetry is great too.
Tony Wilson is responsible for some of the most inventive and enduring post punk (for want of any other description) music. It's not just Manchester and the north west who owe him, it's us namby pamby southerners as well.
Talking of 24 Hour Party People, have you seen the DVD extras, where Martin Moscrop and Bruce Mitchell contribute to the discussion? Very interesting stuff that helps to complete the picture.

Another track I don't think I will ever tire of listening to.

One of my proudest moments was hearing the then 7 year old Leo in his room reciting the words to St Anthony or to be precise what he thought the words were.

That quote comes from the film The Man Who Shot Liberty Valance.

Nick- yes, you're quite right, his influence and importance goes beyond Manchester and the NW.

Drew- Eliza recognises it instantly too and quite enjoys it (secretly).

Michael- yes, you're right too. I read that recently somewhere and should have remembered.