Love Is Just A State Of Mind 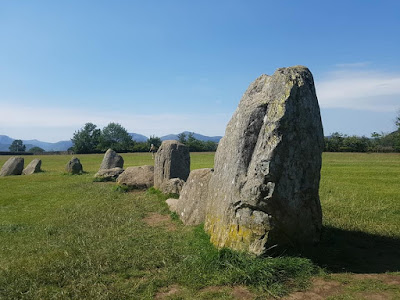 Happiness by The Beloved is yet another album that has turned thirty years old this year and is about to be re- issued on double vinyl. Happiness and its singles sound like a big part of 1990 when I hear them now, a record perfectly in tune with the times. Reduced to a duo, Jon Marsh and Steve Waddington wanted to leave the indie guitar scene behind, fired up by the new music they were hearing. Marsh had been to Shoom and Spectrum in 1988 and has spoken of the experiences as being life- changing. With a few new pieces of equipment they set about making an album fusing dance music and pop and the songs they created succeeded massively. Up, Up And Away is 1990 positivity and optimism bottled- 'up, up and away/ hello new day... just look around you/ well it ain't no lie/ H A P P Y'. Your Love Takes Me Higher is the same but for hedonism and love. Don't You Worry, Wake Up Soon, Time After Time... these are the songs of and for people with wide eyes and big smiles and living in the moment. Album closer Found was 1990's most New Order sounding song.

The Sun Rising was their breakthrough single in '89, an ambient house classic with the goosebump bassline kicking in from the off, backwards guitar, an instantly recognisable madrigal sample, and Jon's whispered vocal, a song describing the end of the night, the walk home at dawn, spent but euphoric.

The songs on Happiness encapsulate the period as much as many others do, and are probably heard best on a car cassette player or your late teens/ early 20s bedroom stereo, an album reflecting what was going on in clubs and the wider culture. A year later The Beloved released Blissed Out, an album of remixes of songs from Happiness plus a new single It's Alright Now, different versions and tracklists across different formats of lp, cassette and CD. I've posted this clip before, The Beloved promoting It's Alright Now on BBC 2's Dance Energy programme. It's Alright Now is a perfectly judged piece of dance- pop. Why it wasn't a bigger hit is a mystery to me.

That Back To Basics mix of It's Alright Now on Blissed Out is the essential one for me. It never gets old. I was talking to Jon in a group recently and he said there'll be lots of extra goodies with the re-release. Looking forward to that.

I always felt that The Beloved, in their indie guitar early phase, sounded like early New Order, and then they kind of morphed into late eighties/early nineties New Order. No bad thing at all though!

Listening to the reissue as we speak. Worth the price of admission to have a decent quality version of the "evening session" mix of Sun Rising, although apparently it wasn't done live as they claimed at the time. Pretty much wore out the tape of that back in the day, in various car stereos and bedroom hi-fi midi systems.

Michael above is right that the Back to Basics mix of It's Alright Now is essential, but there isn't a duff mix of that track. Barely a duff mix across their entire catalogue actually... ooh, has anyone done a Beloved remixes ICA over at the villain's place?

I'm willing to say that Marsh and Waddington understood the new dance/culture better than New Order. Happiness IS a reflection of and hope for the decade. I rate it well above Technique, which at the time I didn't really find great attachment with. Happiness is so successful at creating a mood and spirit, and You're Love Makes Me Higher and Sun Rising remain two of my favorite tracks not made in NYC, NJ, Detroit or Chicago from the era.

Yeah, I only discovered a while back that that "live on Mark Goodier" mix was mostly prerecorded. Still bloody brilliant, especially those added "that's right, that'good", etc. vocals. Like you I wore the tape out.