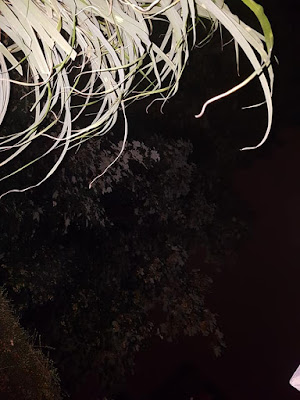 This song seems perfectly placed to illustrate the flipside of this week's heatwave and the truly spectacular lightning displays we've had, the rumbles of thunder and the sudden cracks directly overhead. Opening their 1994 album, dubnobasswithmyheadman, Underworld's Dark And Long is a masterpiece of dub- techno, slowly building tension, ghostly backing vocals and Karl Hyde's stream of consciousness/ overheard on the last train lyrics. The single came with various versions over the different formats. This one, remixed by JBO label boss Steve Hall, ins't too different from the album mix.

This one is a five minute ambient version, very pleasant, all bubbles, bleeps and whispers, and long drawn out synth sounds.

Dark And Long Most 'Ospitable

I always thought the genius of Karl Hyde's words was his ability to stitch together some very different ideas and lines. The opening lines 'thunder thunder, lightning ahead/ now I kiss you dark and long', repeated, set the song off in one direction and then he suddenly drops in this


"Me I'm just a waitress" she said
"I went and bought a new head" she said
"I look at you, I believe in you" she said
Screaming into the eye of the lens'
Later on we get a snatch of cockney, 'what a laugh, you was done up there mate', before the menace of 'thunder thunder lightning ahead...' comes back. A much under appreciated lyricist, especially in the setting of 90s dub- techno, made for dancing.

Yes Karl's cut up lyrics and vocal delivery are both mysterious and hypnotic. For me no one has merged the human voice with machine music so organically. Future music.
-SRC

Since it's release, dubnobasswithmyheadman has been a personal obsession. It begins with the album title, then the album art, and expands exponentially with the opening bass driven tempo of Dark & Long. The album builds, ebbs, flows, builds again and then seems to exhale with the beautiful M.E.